Russia is scuppering goal of innovation with arrests 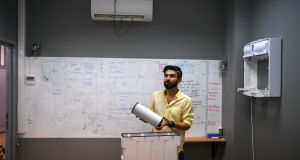 Dmitri Trubitsyn is a young physicist-entrepreneur with a patriotic reputation, seen in this part of Siberia as an exemplar of the talents, dedication and enterprise that President Vladimir Putin has hailed as vital for Russia’s future economic health.

Yet Trubitsyn faces up to eight years in jail after a recent raid on his home and office here in Akademgorodok, a Soviet-era sanctuary of scientific research that was supposed to showcase how Putin’s Russia could harness its abundance of talent to create a modern economy.

A court this month extended Trubitsyn’s house arrest until at least October, which bars him from leaving his apartment or communicating with anyone other than his immediate family. Trubitsyn (36) whose company, Tion, manufactures high-tech air-purification systems for homes and hospitals, is accused of risking the lives of hospital patients, and trying to lift profits, by upgrading the purifiers so they would consume less electricity.

Most important, he is accused of doing this without state regulators certifying the changes. It is a case that highlights the tensions between Putin’s aspirations for a dynamic private sector and his determination to enhance the powers of Russia’s security apparatus. Using a 2014 law meant to protect Russians from counterfeit medicine, investigators from the Federal Security Service, the post-Soviet KGB, and other agencies have accused Trubitsyn of leading a criminal conspiracy to, essentially, innovate too fast and too freely.

The situation has outraged fellow scientists, would-be entrepreneurs and others in Akademgorodok, a freethinking settlement of broad avenues, forested pathways and 35 Soviet-era research institutes near the Siberian city of Novosibirsk. They see it as the Russian government undermining its own stated economic goal: to nurture enterprises that harness Russian brain power instead of sucking oil, gas and minerals out of the ground.

More than 5,000 people have signed a petition appealing to Putin to stop “this shameful example of forceful pressure on a law-abiding business”. Trubitsyn and his company, the petition said, “are, without exaggeration, the pride of Akademgorodok. They are a strong symbol of a prospering Russia in which real technological business can develop to world standards.”

Aleksei Okunev of Novosibirsk State University in Akademgorodok, who has worked closely with Trubitsyn’s company, called the situation “incomprehensible”. He added, “We have very few success stories in Russia, and this explains why.” Putin did not respond, but in a statement his business ombudsman, Boris Titov, called Trubitsyn “a young, energetic representative of the innovation sector, the development of which is most needed for a modern Russia”. But Titov has made similar statements before, to little effect. Despite official state support for innovation under Putin, the growing power of Russia’s security services and rampant official corruption frequently push in the opposite direction.

The first sign of the storm approaching Akademgorodok came early in 2016, when Trubitsyn and his colleagues began hearing that their competitors were telling hospitals that Tion’s air purifiers were dangerous and were being investigated by Roszdravnadzor, a state agency that regulates medical equipment.

State television then broadcast a report accusing the company of jeopardising the health of hospital patients. State hospitals began removing Tion devices. “For years we were praised as a success story and then all these strange things suddenly started happening,” said Mikhail Amelkin, Tion’s chief technical officer. Amelkin said the company was approached by the regulatory agency and said that it had changed its design and removed a supplementary filtering device that laboratory tests had shown was redundant and wasted electricity. The company then amended its registration documents and thought the matter was over, Amelkin said. But armed police officers showed up in June to arrest Trubitsyn and search for evidence of what later court documents described as a “conspiracy” to produce counterfeit medical supplies. (No co-conspirators have been named, but a conspiracy charge allows prosecutors to seek more jail time.)

Natalia Pinus, Akademgorodok’s elected representative to the regional council, is one of many local residents who see Trubitsyn’s troubles as the fault of unscrupulous operators able to manipulate law-enforcement agencies to wipe out competitors.

“This is not just about a single company,” she said, but “whether you can conduct honest business in Russia or whether that is impossible”.

Police raids and arrests figure prominently in many Russian business struggles, particularly those involving assets like oil, over which the state has steadily reasserted control under Putin. Private companies that clash with Rosneft, Russia’s state-owned energy giant, for example, often face criminal investigation.

The decline in global oil prices has, however, also meant less money is available for siphoning off by venal officials. That has turned even relatively small companies into attractive targets for the police and the courts operating in partnership with business.

Amelkin, Tion’s chief technical officer, said he and his staff had been unable to figure out who or what was behind the investigation. “If you try to find out who is responsible for anything in this system you will only find an echo in the cave,” he said, adding that the Russian state “is not a single organism with one brain” but a sprawling mass of separate and often competing fiefs.

Putin has been a forceful advocate of ending Russia’s long record as an economic also-ran in all spheres other than oil and gas, repeatedly hailing Russia’s technical and scientific prowess as an asset on which it can build a vibrant and diversified economy.

Last month, at a meeting of his Council for Strategic Development, Putin again lectured officials on the need to move Russia’s faltering economy – now smaller than that of Italy and 11 other countries – beyond its reliance on natural resources: “We need a breakthrough, and we must ensure it,” he said.

Trubitsyn’s troubles, though, may help explain why such a breakthrough has proved so elusive: the Russian state, which is Putin’s main vehicle for his plans for the nation’s resurgence, often stifles growth. A bureaucracy empowered by a steady erosion of democratic checks and balances can often smother new ideas. Grand state-directed projects to promote innovation – like Skolkovo, a Moscow-area technology park set up by Kremlin fiat as Russia’s answer to Silicon Valley – have mostly fallen flat.

Trubitsyn’s company began in such a state-funded park, one of a dozen such zones set up across Russia after Putin visited India’s tech hub in Bangalore in 2005. Putin had been so enthusiastic about what he saw in Bangalore that he stopped in Akademgorodok on his way back to Moscow to talk with scientists and officials about how Russia could copy India’s example.

Irina Travina, the founder of a software start-up and head of the local technology-business association, said Akademgorodok was “the best place in Russia” with “outstanding schools, low crime and a high concentration of very smart people”. But she said Trubitsyn’s arrest had delivered a grave blow to the community’s sense of security. “In principle, anyone can fall into this situation,” Travina said, praising Trubitsyn as a patriot because he had not moved abroad and had invested time and money in science education for local children. “It can happen to anybody,” she added. “Everyone has some sort of skeleton in their closet. Maybe nothing big but they can always find something to throw you in jail for.” – (New York Times news service)