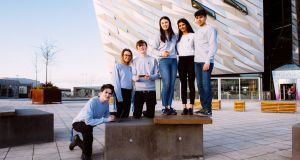 “I suppose it was fairly serendipitous that I came across an article about Harry Beard in December of 2017. I sent him a message to see if he would talk at an event I was running for young entrepreneurs in Belfast, ” explains Adam Flanagan.

Flanagan, 17, from Belfast, and Beard, 19, from Bedford, met for the first time at Flanagan’s event, Future Summit, and since have founded a consultancy and collaborated with another young Irish talent to make a Generation Z documentary. These teens don’t hang about.

“We found we became quite close friends and we were talking a bit more about what we were going to do. We realised, effectively, what I found was my strongest point on social media, especially with some of the smaller companies, was targeting the younger people because I was creating more suitable content for them because of who I am, my age and my experiences,” says Beard. “And he [Flanagan] was finding his event was attracting the attention of lots of Generation Z-ers, he was getting several hundred Gen Z-ers to turn up to a hackathon.” The pair decided to launch their own Gen Z consultancy business Future Labs, providing futureproofing to brands across the UK and Ireland.

“There are a couple of consultancies but, if you go on their websites, what you’ll notice is their staff are 40 years old plus, so how are they going to have an authentic understanding of our generation the same way as we are?” explains Beard.

“Everyone seemed to be talking about Generation Z and all the nuances behind it. I realised it’s quite a big buzz, so we decided to come together to formulate a formal Generation Z consultancy which takes both of our experiences and offers it to companies on a larger scale.”

It wasn’t Treacy’s first documentary of this kind; he’d previously released his own take on Gen Z, which caught the attention of the Future Labs co-founders.

“I got an email from Harry and he basically said to me, let’s make a documentary. He thought my story could be very well told in a longer form but also with examples of some contacts he had. Basically he wanted to create a bigger project on a bigger scale because he felt I had a lot of potential following my previous video,” says Treacy.

Despite being in third year at school, Treacy presented, filmed and edited the half-hour long film, The World of Generation Z, on location in Bedford, London and his bedroom in Ashford, Co Wicklow

“I started making films when I was actually seven years old. I started off through acting with a few acting classes, eventually I got an advert. While we were filming this commercial I was fascinated by the set and the director and all the cameras and everything, and I decided I want to give this a try myself and actually be behind the camera, so that’s what I did. I started off small with my dad’s little camcorder, I got my own laptop and started editing videos on that, and my gear got bigger and bigger and eventually I think I just started taking it seriously. And I was learning from lots of YouTube videos which I guess relates to the idea that Generation Z, they know they can learn from basically any source.”

It’s what’s at the heart of a lot of the business, putting the message out there that Generation Z are so much more than what you see on the surface

Belfast native Flanagan is currently studying for his A levels, but he still finds the time to successfully give his input into the company. “At Future Labs we are really trying to focus on doing things in as many different areas as possible. Obviously one of those areas is video, because YouTube is so big with our particular demographic. I don’t think we’d have been specifically focused on a documentary, but once the idea was born I think it just made perfect sense.

“It’s what’s at the heart of a lot of the business, effectively – putting the message out there that Generation Z are so much more than what you see on the surface. They’re probably the first generation that has the power to make their dreams come true, as in if a teenager does want to set up a business they can use the technology to do that. Take Harry and I, for example, we first met via the internet, which before wouldn’t have been possible in our parents’ generation or generations before that.”

The documentary is not expected to be a once-off. It’s a useful tool to highlight the generation in question in what would seem is their natural habitat. Beard explains how the subjects of the film came about.

“I just contacted three people that I knew that were pretty close to the top of their fields that any Gen Z-er is at. There was no intended bias. All three people in the video are friends of mine who came and did me a favour. We are making another documentary and that will obviously be a bigger push for us to ensure, consciously or subconsciously, that there is a greater equality across the board.”

The forward thinking doesn’t stop there, as Flanagan explains what the future holds for Future Labs as a business. “It’s underpinned by technology, we are currently designing a tech platform built around Gen Z which are effectively going to be businesses big and small that want consultancy on how they can structure their business for Generation Z. That can be a whole range of things, whether it’s in marketing, adapting their messaging more effectively or even the recruitment process.”

It would be easy to finish by saying something cheesy like “the future is bright”, but these young entrepreneurs have proved that the future is now. We need to take note – we are at an age in which old shoulders may not always be the wiser when it comes to survival in tech-driven business.