Scientists say the spread of antimicrobial resistance is a ‘global disaster’ 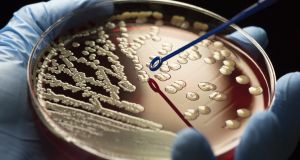 Some bacteria have become totally resistant to all our antimicrobials. And now we have to begin responding to potentially dangerous organism arising in nature

The storyline sounds like the script for a B-movie thriller. Apparently harmless bacteria are released into our sewerage system and into rivers and streams to be dispersed into the environment. But these bacteria carry a dangerous mutation, one that they then share with wild bacteria to grow and spread into plants and animals. Eventually they come back more life-threatening than ever, and resistant to our modern medicines.

Never gonna happen you say? It already is happening outside cities and towns around the world, and in countries that make extensive use of antibiotics and antimicrobial substances.

We are all familiar with the warnings given by medical researchers that careless consumption and overuse of antimicrobials and antibiotics is rendering them gradually less and less effective as a way to clear bacterial infections. This forces doctors to use stronger antibiotics that over time also lose their effectiveness as bacteria become more and more resistant.

And so the microbiological arms race goes on and on. This process is seen in human medicine, but also in intensive agriculture. Modern farming makes very extensive use of antibiotics, for example in beef and poultry farming.

Penicillin was the first antibiotic to come into widespread use in the early 1940s, but its discoverer in 1928, Alexander Fleming, warned that unless new antibiotics were found organisms would gradually become resistant to the drug and survive treatment.

Medics and veterinarians have since been able to watch the gradual decline of antibiotic effectiveness as agents such as the MRSA hospital bug, “totally drug-resistant TB” and others developed ways to survive treatment and come back stronger to cause illness and even death.

Scientists readily describe the spread of antimicrobial resistance as a “global disaster” given its international reach.

In response, intensive research is under way internationally to discover new families of antibiotics that are able to wipe out bacterial infections. Governments are also introducing programmes to control antimicrobial resistance.

In the early days scientists focused most of their efforts on discovering families of drugs that could knock out infection. They had great initial success, but decades on they are running out of new candidate drugs. With few drugs emerging some bacteria have become totally resistant to all of our antimicrobials. And now we have to begin responding to potentially dangerous organism arising in nature.

Unfortunately during the early days far less money and effort was put into what happens to the antibiotics that find their way into the natural environment and what impact they might have on human health. Researchers in Ireland and elsewhere are trying to overcome this information deficit, and are showing just how potentially dangerous things have become for antimicrobial resistance in the open environment.

First, there is no shortage of antimicrobial supply available, delivered in the sewage discharges coming from large urban centres in the developed countries. Some of these drugs are slow to degrade, and research has shown they continue to remain effective for a time once past the sewage works and into the open environment.

Here they can interact with organisms, killing some but only weakening others who gradually develop resistance to the antimicrobial’s presence. Their survival is helped along due to a tendency amongst bacteria when under stress to share genes. Sometimes the genes they receive have no impact, but scientists have shown that resistance genes have successfully been shared, allowing the bacteria to go resistant in a single step.

Scientists warn that there is a knowledge gap in our understanding of the natural world pathways that might lead to wholly resistant bacteria. And the level of risk to human and animal health is also uncertain given the difficultly in monitoring something as large as the environment and the organisms living in it.

One could imagine a functional antibiotic being discharged into a river or stream. It might be ingested by livestock or interact with bacteria in the animal or on grazing land. This could prompt stress-induced gene-sharing or gene mutation to deliver antimicrobial resistance. What process if any would then be in place to ensure the organism does not return to the human food chain?

Antimicrobial resistance shows the relentlessness of natural selection, the process that drives evolution. Bacteria evolve must faster then we can, and so nature keeps throwing up new challenges all the time.

The UK and Irish action plans rely on better controls on the use of these drugs and finding ways to reduce discharge of viable antimicrobials into the human waste stream. Sitting back and hoping for the best is not an option. The UK document suggests that antibiotic resistance could kill 10 million people internationally every year by 2050.