Does ‘robo-journalism’ pose a threat to reporters? 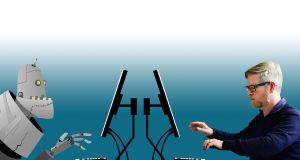 It has been a tough few years for journalists. First came the internet, then the recession, then the positioning of social media giants like Facebook and LinkedIn as publishers in their own right. And now another massive challenge is looming, one which could prove to be far more disruptive to the media than anything that has gone before.

Well not robots exactly; we’re unlikely to see The Irish Times building taken over by a team of crack Short Circuits or Watsons tapping out market reports at their desk. These days it’s all about intuitive software, which can seek to replicate tasks currently carried out by humans.

Journalists of course are not alone in this risk: research from the University of Oxford has suggested that as many as 47 per cent of US jobs are at risk from automation over the next 20 years. But unlike other careers perhaps, software is already taking over some work that journalists may previously have done themselves.

John Hathorn, a growth hacker with North Carolina-based Automated Insights, says that the company’s Wordsmith platform, a self-service natural language generation platform, links up with Zacks Investment Research, an investment research firm, and then puts the data it obtains through a template, through which generates reports.

He says that thanks to this software, the AP has managed to cover 15 times more corporate earnings reports than they could done previously – and no jobs have been lost in the process.

Indeed for Hathorn, robo-journalism is most definitely not about displacing journalists.

“We vehemently disagree with this view. We’re not trying to replace anyone, just help augment their time so they can do the things they love doing, ie interviews, and not data mining,” he says.

This perspective on “commodity news” versus real journalism, is a view that has some traction.

“Done properly, automated journalism has the potential to make all our jobs more interesting,” he wrote last year, as the news organisation announced the creation of a 10-person team focusing on automation initiatives.

So where will robots fit in in a typical newsroom?

They are undoubtedly quick, a big plus in today’s push to be first with everything; they’re potentially more accurate . . . and they won’t huff and puff when asked to do cover something they don’t want to.

They do, however, have limitations.

For one it’s an expensive investment, and while it might be appropriate for a news organisation of the scale of AP or Bloomberg to invest in, given the sheer volume of stories they cover, it might be harder to make the sums stack up for even a national news organisation in a country the size of Ireland.

And it’s not just money the bots need to work; it’s also journalists’ time. Consider Automated Insights’s approach. It currently has a template established for companies covered by Zacks Investment Research, but stray beyond this – as I did initially when I asked for an automated report on Bank of Ireland – and it requires a whole new range of inputs to be given to the software.

And they’re not always as accurate as you might expect; this story generated by Automated Insights for the AP is a “Correction” on an earlier story.

Even robots it seems, make mistakes. It’s also a question of style – and content.

A study in Journalism Practice for example, found that only a few people could discern whether a sports article was written by a bot or a journalist – but they did find the automated article “a bit boring”.

Consider the automated article prepared for this article by Automated Insights. It tells the story of the company’s results accurately and concisely, giving a neat precis on the company’s share price; but where is mention of a big issue at the company, a $50 million impairment charge incurred after pulling a filing with the FDA for approval of a product for diagnosing heart attack? Where is a quote from the company’s chief executive?

And what about discovering news stories? Asking questions? Building a contacts book? Weaving threads into a tapestry that tells a tale.

An obvious failing of these kinds of automated reports is that they’re dependent on company filings; the robot doesn’t get to hear the tenor of the chief executive’s voice, or see the whites of his eyes; it hasn’t heard the market rumours, or has actually used the company’s products.

Bots will get smarter

However, as artificial intelligence progresses – which it is doing so at a rapid pace already – the bots will get smarter and could start to write more compelling copy.

Andrej Karpathy is a computer science PhD student at Stanford University in California, focusing on natural language processing and recurrent neural networks (RNN), which can model languages. He has had some success in getting software to recreate the language of Shakespeare.

“They are away this miseries, produced upon my soul, Breaking and strongly should be buried, when I perish, The earth and thoughts of many states” is one such generated quote he has produced.

However, he says there is a big difference in getting RNNs to model language of the likes of the above, which tends to be “blabbing and makes no high level sense”, and writing compelling copy.

Hence the success perhaps with Shakespeare – language which doesn’t make sense to most of us.

“Getting it to report something specific would be nontrivial,” he says, adding that while it’s not insurmountable in the long term, it’s “not obvious in the short term” either.

For now then, it seems that robots will continue to inch in on the role of the journalist but only in a marginal, specific way, mostly focused on data-driven stories. As a result, it may not be the robots that diminish journalism; it could be the hand that purports to feed it – the media itself.

In an era of falling advertising revenues and declining newspaper and magazine sales, some media organisations have sought to keep costs down not by automating content, but by not paying those who create it for them.

So why would news organisations feel the need to invest in expensive, intuitive software when they can just rely on contributors to provide a raft of free content? That’s perhaps the bigger challenge facing journalists.

Who can do it better – a journalist or a robot?

BRAY, Ireland _ Trinity Biotech PLC (TRIB) on Tuesday reported a third-quarter loss of $517,000, after reporting a profit in the same period a year earlier.

On a per-share basis, the Bray, Ireland-based company said it had a loss of 2 cents. Earnings, adjusted for non-recurring costs, came to 7 cents per share.

The medical diagnostic products developer posted revenue of $26.1 million in the period.

Trinity Biotech shares have declined 40 percent since the beginning of the year. The stock has fallen 46 percent in the last 12 months.

Subhead: Company says latest results not impacted by withdrawal of US filing or facility closure

Irish medical diagnostic firm Trinity Biotech fell into the red in the third quarter, reporting a $369,000 (€339, 970) pre-tax loss versus a $12.6 million profit for the same three-month period a year earlier.

The company, which is based in Bray, Co Wicklow, and is quoted on the Nasdaq exchange, recorded revenues of $26.1 million, up 1.4 per cent from $25.9 million.

Earnings before interest, tax, depreciation, amortisation and share option expense for the quarter was $4.6 million.

Operating profit for the quarter was $2.7 million, as against $3 million for the same quarter in 2015.

A breakdown of turnover shows point-of-care revenues fell by 9.5 per cent in the third quarter, from $5.4 million to $4.9 million, which the company said was within the normal fluctuation range of HIV sales in Africa. Clinical laboratory sales rose 4.3 per cent to $21.2 million from $20.3 million, primarily because of increased Premier and autoimmune revenues.

Research and development expenses were in line with the equivalent quarter last year at $1.3 million.

Trinity said its decision earlier this month to pull a filing with US authorities for approval of a product for diagnosing heart attacks and to close a facility in Uppsala, Sweden, did not impact on the latest results.

The company expects to record an impairment charge of in excess of $50 million in the fourth quarter in relation to the costs incurred on its Meritas project and the closure of the facility.

Trinity said it was asked by the US Food and Drug Administration (FDA) to reconsider withdrawing its submission for the heart attack diagnosis Meritas Troponin-I test and Meritas Point-of-Care Analyzer, due to concerns about its clinical performance.

“The last few weeks have been difficult for the company. We had invested considerable time and effort in developing our Troponin test on the Meritas platform and it was extremely frustrating that, even with its clear performance advantages over its competitors, FDA approval was not forthcoming,” said chief executive Ronan O’Caoimh.

He said the company believed the technical performance of Meritas still made it a valuable platform.

“In the months ahead we will look closely at a wide range of alternatives with a view to maximising this value. This will include looking at alternative menus and/or collaborations with third parties.”

Mr O’Caoimh said while Trinity would continue to look at acquisitions, he believed that at the current share price, a buyback of stock represented the best option for the company at present.

This story was written by Charlie Taylor, an Irish Times journalist.