Focusing on risk, remoteness and rarity in virtual reality 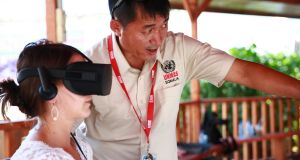 A virtual reality training project with the United Nations mine action service in Somalia. 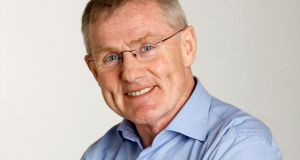 VRAI chairman Gabriel D’Arcy: “We adopted as our vision our new contract with nature, which at its essence was all about sustainability,”

Gabriel D’Arcy is not the typical chairman of a technology company. Originally starting his career in the Defence Forces, the path to VRAI took him through Kerry Foods, Bord na Móna and the pre-merger LacPatrick Dairies.

It’s a far cry from his current role as chairman of virtual reality company VRAI. The company, which was founded by Niall Campion in 2017, is focused on content creation using immersive technology. Instead of Bord na Móna’s switch to biomass or Kerry Group’s constant evolution, VRAI has created virtual training programmes for spotting explosive devices, and worked on projects for large mobile phone makers.

But there is some crossover. Among the clients the young virtual reality company has worked with are Samsung, the ESB, Kerry group and the Defence Forces. So it is familiar territory in a way for D’Arcy.

But although none of his previous employers could be described as technology companies, they all had something in common: a focus on innovation and a willingness to change.

“I don’t think I was in one job for more than a year at Kerry,” D’Arcy says. “I joined at a time of extraordinary growth, most of my Kerry career was spent abroad in the international sphere. And it has always involved change, so the change culture is embedded in the Kerry culture.”

Up until 1988, Kerry’s business was focused on dairy. But the company was already changing when D’Arcy joined, expanding into new markets. Today, it is a multibillion-euro company, and dairy makes up only a fraction of its business.

“Kerry reinvents itself every five years. And that’s the great thing about it. That’s almost embedded in the culture of the organisation,” he says. “People nearly get impatient if it’s not changing.”

D’Arcy spent 19 years with Kerry and in his final role worked as commercial director of the company’s European ingredients business. A change of family circumstances – the birth of his fourth child – prompted a rethinking of work arrangements, and D’Arcy was on the move again, this time closer to home, to Bord na Móna.

“I needed a complete change like I had done when I left the army to join Kerry,” he says.

Bord na Móna certainly provided that. The company, established in 1932, has in recent years shifted away from its more traditional peat business to other energy forms such as biomass and energy recovery from anaerobic digestion systems.

“We adopted as our vision our new contract with nature, which at its essence was all about sustainability,” says D’Arcy. “Today, Bórd na Mona is a leader in renewable energy has got the largest wind farms. These were all developments that took place during my stewardship.

It is still a large gulf between his old roles and his new position. D’Arcy’s first experience with virtual reality was at a trade show in Dubai called Gulf Foods, while he was working with LacPatrick. Nestlé was using virtual reality to tout its sustainability credentials – a VR experience showing where they where they harvested their coffee in Ecuador.

“It brought in great reality the experience of harvesting coffee beans,” he said. “I was gobsmacked with this. Because, you know, this very much brought home, in a very real way, what Nestlé were doing, and how they were doing it with an everyday commodity that we all use and we don’t fully understand how it’s all provided.

That kicked off his interest in the technology, and he began investigating how LacPatrick could work with Irish companies to harness its power for food safety operations, handling and other regulatory-driven aspects of managing the food supply chain.

“I immediately put my thinking hat on, because there are so many applications for this, particularly in the food industry,” he said. Training, for example, takes a huge amount of time, and there was an obvious benefit to bringing in virtual reality.

“This was a much more immersive and much more effective way of teaching people and making people aware. It’s got a much higher retention capacity,” he said.

Following his decision to leave LacPatrick last year in the wake of the merger, he looked into investing in VRAI and met VRAI chief executive Pat O’Connor and founder Niall Campion.

VRAI has been selected for Enterprise Ireland’s high-potential start-up programme, a strong endorsement of its capabilities. It was that backing, along with the company’s tie-ins with Samsung and agencies such as the United Nations, that persuaded D’Arcy to invest in the firm.

“I was very impressed with their track record. I am particularly impressed by their focus,” he says. “It represents the key opportunity they operate in. Because in VR and AR the opportunities are very wide and very deep. Depending on where you sit and what you include, this is a $200 billion global industry. They are very focused on risky, remote and rare opportunities. And that is the critical ingredient, I think, the difference in VRAI from anybody else.”

Those “risky, rare and remote” opportunities also include training for maintaining and repairing offshore oil and gas facilities, but that could provide an opportunity in the future for the renewable energy space, with offshore wind energy, for example.

From the company’s point of view, D’Arcy’s experience was a valuable addition to the board. He is also a chartered director and a former member of the board of the Institute of Directors.

“As it pertains to industries that I would be familiar with, I can see massive opportunity. So I suppose I’m a kind of a bridge between the new world of technology and some of the old worlds that are being disrupted by this technology,” he says.

That’s not the only thing that is dragging him into the world of new technology. “I’m much more tech savvy than I ought to be given that I’m a post-digital native in many respects,” he says. “I have a 20-year-old, an 18-year-old, a 16-year-old and a 12-year-old, they are really challenging me in terms of I how I communicate with them. And, you know, I think in the modern era you have to be where they are. It’s the same in the marketplace: you have to be where the market is.”

For now, the challenge will be integrating the technology into more traditional sectors.

“I think where VRAI scores best is when it’s focused on those industries, such as the energy sector, medical sector, defence sector, in functions, such as safety, training, operations, rare procedures I think that’s the sweet spot for VRAI.”

To get to that point though, VRAI is planning to invest and the company is currently fundraising to meet that objective.

“I think that that’s going to fund the next phase of growth for VRAI. So the next horizon of growth is certainly is going to be doing more in apps, a much stronger focus on those industries, and functions within industries that can benefit most from this risky, remote and rare approach, because that’s what we specialise in. more than than others,” said D’Arcy.

“I think I think VRAI is at the cusp of a great opportunity. And I think the future is just really, really positive.”