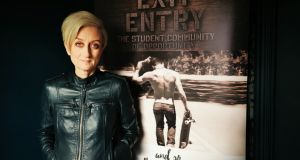 Lewize Crothers, founder of Exit Entry: ‘Exit Entry is an employment solution meeting a genuine need, but also a force for social inclusion and that’s very important to me.’

When Lewize Crothers returned to education as a mature student in 2016 she was disappointed to discover that little about the graduate recruitment process had changed in almost two decades. But this time, with the benefit of a career in design behind her and experience of starting a business, Crothers saw an opportunity to turn what she saw as a continuing recruitment deficit into a new venture. She called it Exit Entry and it will have its official launch shortly.

The problem Crothers identified was that young people were finishing college with little or no interaction with potential employers until their last year, if at all. They were also applying for jobs with no idea whether their skills and personality would suit the role. At the same time, employers were choosing candidates largely on their academic results with no feel for how they might perform in a role or fit with an organisation’s culture.

With the world of work predicted to change dramatically in the years ahead, tomorrow’s workforce will need a suite of skills to thrive in this more fluid environment. Soft skills will be particularly crucial and this is where Exit Entry fits in. Its platform is designed specifically to measure and showcase students’ soft skills. It then matches their soft skills with the soft skills required for different jobs and connects students with potentially suitable employers.

Exit Entry facilitates direct communication between students and employers and encourages both parties to engage much sooner, as early as first year rather than in year three or four which is more typical.

“Employers now expect graduates to come with a portfolio of attributes that will translate into effective and engaged performance in the workplace. These attributes go beyond traditional personality type indicators as they also include aspects of motivation, engagement and potential,” Crothers says.

“Most firms rely on traditional tests when screening potential new recruits, but research shows that many of these tests are weak predictors of workplace adjustment and performance and some are open to bias responding,” she adds. “We want to flip this perspective. How about measuring what people can do and are doing, rather than attempting to find out who they are or were?”

Having identified her niche, Crothers set about finding an academic partner to help her realise it. DCU stepped up and a €350,000 commercialisation grant from Enterprise Ireland enabled the vision to take physical shape in the form of two psychology-based software tools that measure performance in the workplace and cultural fit for an organisation. The venture was supported throughout by academics from DCU’s psychology and trust & leadership departments and DCU will have a stake in the spin-out company.

Students log on to Exit Entry where they register and build a profile to show their interests, hard skills, experience and achievements. They can then take the online test to see how good their soft skills are. If the students agree, this information can be shared with employers who will use Exit Entry to advertise jobs. Students and universities can use Exit Entry for free. Employers will pay a fee.

Exit Entry has been developed for the global marketplace and the company is currently in negotiations with potential investors to secure round one funding. The senior management team is in the process of being built out and Crothers believes employment potential within the company will be significant as both students and employers begin to realise the benefits of the system.

“My aim now is to bring a team of experienced people together who can scale the business quickly,” she says. “As things stand there is a cohort of student talent being left behind because it doesn’t fit naturally into the ‘type spec’ employers are using. Exit Entry is an employment solution meeting a genuine need, but also a force for social inclusion and that’s very important to me.”