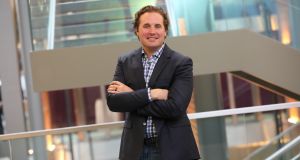 Caleb Harper, director of the Open Agriculture (OpenAG) Initiative at the MIT Media Lab: ‘We need to know more about what we put in our bodies’ 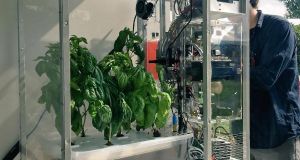 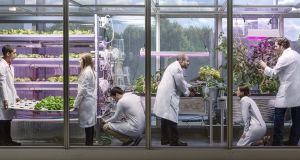 Caleb Harper didn’t start out with the intention of revolutionising the food industry and building an army of “nerd farmers”. In fact, despite a family background in agriculture, his first career had nothing to do with farming. The man who has made a name for himself by building “food computers” started out as an architect.

“I used to professionally design data centres in the US, and hospitals around the UK. As an architect I was always designing climate because data centres are about getting rid of heat at all costs, so you’re really designing a building for a computer,” he explained. “And with the hospitals I was designing a building, especially surgical theatres, to protect for contamination and disease – the biologic control of an atmosphere or environment.”

It seemed like a natural fit, if a circuitous route, to start building climates for plants. But the inspiration for his new career didn’t come from his background; it was a trip to Japan with the MIT Media Lab in the wake of the tsunami and Fukoshima disaster that triggered his interest.

“Ostensibly I was there to work on cities, new cities: how would they rebuild cities destroyed by the tsunami, how would they bring the youth back to this rural landscape that had left for Sendai, and left for Tokyo, ” he said. “It looked a lot like where I grew up in South Texas, a post-apocalyptic version of where I grew up. The tsunami came, salt had contaminated the land, there was the radiation.”

He found one question occurred to him: if you don’t have the climate you need, could you build it?

Harper created the OpenAg Personal Food Computer, a a tabletop-sized agriculture technology platform that uses robotic systems to control and monitor climate, energy and plant growth inside a growing chamber.

It can control climate variables such as carbon dioxide, air temperature, humidity, dissolved oxygen, potential hydrogen, electrical conductivity and root-zone temperature, and the various results in the plants can be tracked.

That means the impact of various components on the plants can be tracked, leading to better ways to grow crops for specific purposes.

That computer is the first of three components in Harper’s strategy: encoding it to make it digital. The hardware is open source, so anyone can build it, with the smallest food computer measuring one cubic foot. It’s aimed at everyone from children and makers to students and scientists. That particular one is a computer that Harper has been building since 2015.

Since then, he has branched out into food computers as big as containers, ones that can hold trees rather than small plants, and has worked with companies such as Ferrero, which buys a significant proportion of the world’s hazelnuts – hence the trees inside computers.

The topic makes for fascinating listening. It was also a key factor in bringing him to Ireland, to take part in AIB’s Sustainability Conference.

The second component in this system is decode – understanding the digital signatures; the final stage is to recode, figuring out how to use this new information in the world.

The ultimate result of this data could be a better way to grow crops, in different environments, using less water or a different type of fertiliser. It also means taking agriculture back to its roots in a way – open source.

“We shared information since 10,000 BC with each other on what to eat, where to eat, how to eat, what won’t kill you, what will make you stronger. In the last 50 years, it’s become a lot more opaque,” he said. “A lot of the intellectual property was captured by companies, and a lot of those companies do and did help feed the world. It’s not like I think that they’re evil. But as the information got taken out of the space – the information on innovation in food – and as the people got farther away from needing to know how their food was grown, and all our populations shrunk that were working in agriculture, we’ve ended up with this moment in time where we don’t have much information and the general consumer doesn’t know much. This is why I build those tools for kids and why I operate the global community of nerd farmers.”

The idea that we have to do more with fewer resources is an increasingly common theme. A recent report from the UN warned we have less than two decades to reverse the damage we are doing to the planet or risk completely destabilising the climate. That would lead to increased food scarcity as insects – vital for crop pollination – lose their habitats.

There is more bad news ahead. The world’s population is set to hit 10 billion by 2050, and producing food for the planet will take its toll on the environment. Farming already contributes to the changing of our environment through deforestation and water shortages in a bid to produce more food, increased greenhouse gases from livestock, and agricultural pollution that poisons the oceans.

There has been a shift in how we consume food, Harper said.

“We need to know more about what we put in our bodies. The reason organic became mainstream is not that it’s necessarily any better for us, it’s that we believe it’s better for us and it’s marketed as better for us. It’s an open question scientifically, does that organic vegetable contain more nutrition than the conventional vegetable? That’s actually really hard to answer because at what time of year are you talking about. Which vegetable? Which market?”

These questions are all hard to answer – for now. But technology such as the food computer could help with that in the future as it yields more data that can be used to grow crops and develop them.

It could mean a dramatic shift in farming in the future.

“If you are a young person now, imagine that this moment in time is the exact same moment as the ’60s or ’70s of personal computers and the digital revolution, but it’s repeated today with biology,” Harper said. “ It’s the digital-biologic convergence.”

It’s a tough road, though. Distrust of genetically modified food among consumers has made it difficult to argue the case in favour of the foodstuff.

“There is a portion of the population that is incredibly fearful of GMO, and maybe their minds will never be changed, because it requires a lot of nuanced knowledge to understand what that means,” he said. “But then there’s a young generation that is racing towards this neo-biologic future that is the combination of biology and the digital world. It’s really exciting to see that.”

Ultimately the greatest weapon in this fight will be transparency and truth. The move has already started with the ability to sequence the human genome; people are also learning about more their gut microbiome.

“As you know about your genetics and the trillion other organisms that are inside you, you start to realise it’s all one ecosystem and it all runs on the fuel that you give it,” said Harper. “I think that is causing us to be much more precise about what we eat and why, but the problem with that is there’s a huge lack of transparent information about what we eat and why.”

That is certainly an issue, with fad diets and conflicting information about the nutritional value of food at one end of the scale, and a lack of understanding about how and why we should eat certain other foods at the other end of it. But that could soon be brought to an end.

“We’re getting into the ability through technology to raise the curtain on food. It really requires that whole supply chain to become a set of ones and zeroes,” Harper said.

“What needs to happen is the digitisation of this space, meaning with digital technology, with more information will come truth. I think there’s whole lot of truth that’s about to come out about what we eat, how it affects us. We are getting very close.”