QuickStitch combines the best of stitches and staples in a single, easy-to-use device 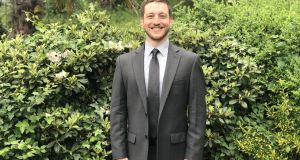 Travis Davis, co-founder of Trinity College-based startup Starling Surgical. “The market was ripe for an alternative and QuickStitch has the potential to fully disrupt this multibillion dollar market.”

More than 230 million open surgical procedures are carried out worldwide every year and all require wound closure of some sort. How the skin is closed is critical to good clinical outcomes and the most popular options are traditional stitches made from either natural or synthetic textiles or skin staples. Sutures give a better clinical result but they can be slow to put in. As a result, staples are more widely used because they are quick to insert and can save up to half an hour of theatre time. However, staples have a number of downsides. These include poor cosmetic outcomes – scarring – and double the risk of wound infection, according to Travis Davis, co-founder of Trinity College-based startup Starling Surgical, which has developed a new type of wound-closing system that combines the best of stitches and staples in a single, easy-to-use device.

Starling’s solution is called the QuickStitch and Davis says it does the superior job of stitches with the speed of a stapler. “QuickStitch is the only device currently available that can close wounds quickly but with all the clinical benefits of meticulous sutures,” he says. “Operative wounds closed with the QuickStitch will have better cosmetic results and lower infection rates as well as making time savings. Suturing is slow, taking up to 30 minutes in some cases, and this can increase mortality by 25 per cent in certain patients. It also means that patients are anaesthetised for longer and it ties up theatre time which is an issue for efficient throughput in cost conscious health services everywhere. However, surgical staples are known to have increased clinical complications and are considered archaic by many surgeons. A good alternative to staples does not currently exist and we believe our device can serve this unmet clinical need.

“The wound-closure market has remained unchanged for decades and is dominated by sutures and staples which have had small incremental improvements and developments over the years, but that’s been it,” Davis adds. “The market was ripe for an alternative and QuickStitch has the potential to fully disrupt this multibillion dollar market.”

Davis is a mechanical engineer with an MSc in bioengineering, specialising in medical device design. Prior to becoming CTO of Starling Surgical he worked at Nasa’s Marshall Space Flight Center as a liquid propulsion research and test engineer specialising in 3D printing. His co-founder, Cyrus Doctor, graduated in management and medical sciences from Imperial College London before completing his medical training there in 2007. He then spent 11 years as a trauma and orthopaedic registrar with the NHS in the UK before taking a sabbatical from clinical medicine in 2014 and coming to Ireland to participate (with the support of Boston Scientific) in the Bioinnovate med-tech programme at NUI Galway. His idea for “seamless stitching” and for what has subsequently become QuickStitch won the 2015 Clinical Innovation Award which recognises commercial potential in Ireland’s clinical community.

“Cyrus had personal experience of having a wound closed with staples and he was well aware of the distress staples can cause. But as a surgeon he knew they were necessary and had used them on patients frequently,” Davis says. While on Bioinnovate, which puts engineers and clinicians together to work on medical problems, Doctor was able to begin teasing out how the competing issues around suturing might be addressed and what kind of device could achieve this. By the time Davis and Doctor met around two years ago, the QuickStitch concept was well developed in Doctor’s mind and Davis knew his engineering skills could help lead the technical development and clinical validation of the device.

The founders were introduced to each other by Dr Bruce Murphy, Trinity associate professor of biomechanical engineering. “I had done my MSc in Trinity and while there I had worked in Bruce’s lab in the Trinity centre for bioengineering,” says Davis. “We’ve stayed there since setting up the company as this incubator lab has a great track record of innovation and fostering successful medtech startups including Croí Valve and ProVerum Medical. Our plan is to remain here until our fundraising is complete and then look at spinning out in about a year’s time.”

To date, the company has raised about €1 million

Starling Surgical was officially established just over a year ago and it employs three people. To date, the company has raised about €1 million, which includes a little under €500,000 in a commercialisation grant from Enterprise Ireland and support from the EU EIT Health fund. The company is planning to raise a further €3.5 million in a Series A round which will close at the end of June 2020. Its product has global reach and an estimated addressable market of about $2 billion. The company will sell its device through a mix of global distributors and an in-house sales team.

Starling Medical has two potential competitors in its niche but Davis says feedback from surgeons suggests that neither option is likely to capture the market. “What we’re hearing is that these solutions are either not easy to use or not secure enough and you can’t take any risks with wound closure. If a wound were to open you’re facing a potentially catastrophic adverse event,” he says.

Details of the QuickStitch delivery device are still under wraps but it is a disposable unit that will produce the same result as the preferred option of single interrupted textile sutures. “The device has been ergonomically designed so it fits easily into the surgeon’s hand and he or she will know instinctively how to use it,” says Davis. “We haven’t finalised the type of material we will use for the sutures but it will be the same as the materials currently in use. This reduces the testing and regulatory burden and allows us to progress to market faster.”

The company is now talking to a number of manufacturers in Ireland about making the device here and Davis says it will be competitively priced, costing little more than a stapler but less than the other options trying to disrupt the market. “If someone has a total hip replacement or a Caesarian section, for example, there is a sizeable wound and you really don’t want to be closing it with staples for infection reasons, never mind aesthetic ones. With QuickStitch there is now another option,” Davis says.

“Our patent will cover a disposable and a resposable device, but based on the feedback we’re getting so far, surgeons prefer single use,” he adds. “It is possible to reuse a device like ours but there are a lot of steps in the sterilising process and the surgeons we’ve talked to feel this is too risky from the point of view of infection. So, we are taking heed and listening to our market.”