How entrepreneurs invest in innovation capital 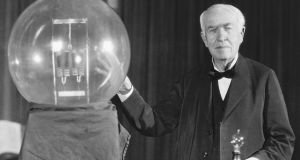 Thomas Edison carefully fashioned an image as a hands-on inventor and built social capital with other inventors, financiers and wealthy families.

Many of those involved in innovation fail to win the funding, talent, technical support or other resources required to progress their plans, despite having clever and potentially winning ideas. The missing link could be their failure to develop what is known as innovation capital, according to the authors of a new book of the same name.

They suggest that far from being an elusive element, innovation capital can be acquired, developed and amplified to achieve success in innovation efforts.

Authors Jeff Dyer and Nathan Furr, strategy professors at Wharton and INSEAD universities, together with co-author Curtis Lefrandt, have spent many years studying how people compete for and obtain resources to launch innovations – in some cases even before they have established track records as innovators.

Their conclusions suggest that winners in this area are those who are firstly forward- thinking and skilled at problem-solving and persuasion. In addition, they know how to leverage social connections and build reputations for innovation which they then amplify to generate attention and credibility. This builds their stock of innovation capital which helps them win the resources needed for innovation to thrive.

Speaking to The Irish Times, Nathan Furr explains that innovation capital is more than mere charisma. “It’s an entire set of skills tied to leadership, influence, social capital and relationship management. It’s a synthesis of who you are, who you know and what you are known for,” he says.

Moreover, Furr explains that his team’s research suggest that the interplay between who you are as an individual (human capital), who you know with expertise (social capital) and what you have done to warrant a reputation for innovation (reputational capital) has a multiplier effect.

“These three elements work like gears and positively reinforce each other. Eventually you get a flywheel effect. Resource holders simultaneously consider all three components when deciding whether to give someone their time or resources.”

The authors compare the two great inventors Thomas Edison and Nikola Tesla. Tesla was regarded as the more brilliant of the two but Edison had a far better ability to build and leverage innovation capital so achieved far more.

Edison carefully fashioned an image as a hardworking, hands-on inventor and built social capital with other inventors, financiers and wealthy families such as JP Morgan, the Vanderbilts and the Rockefellers. When Edison developed a commercially viable light bulb, he was able to convince Morgan to advance him $30,000 for the Edison Electric Light Company. Morgan’s home in New York was one of the first to be electrified, generating further attention for the project.

Apple co-founders Steve Jobs and Steve Wozniak similarly differed as the former, like Edison, had the skills to recruit talent, secure financial resources, develop desirable products and gain attention for themselves.

An unshakeable confidence and the ability to persuade often go hand in hand, Furr notes. He cites the case of where Jobs used his powers of persuasion in 2007 to convince Corning chief executive Wendell Weeks that he could develop and manufacture enough crack-resistant glass – branded Gorilla Glass – for a million iPhones within six months. At the time, the glass was only a prototype and Corning didn’t have a production facility to build it.

Jobs placed a large order anyway, telling Weeks: “Don’t be afraid, you can do this.” Corning not only figured out how to do it but reportedly produced enough Gorilla Glass to cover the equivalent of more than 20,000 football fields for the iPhone over the following decade.

Another important quality is the capacity for forward thinking. The best innovators are those who try to imagine the future and then place smart bets on the technologies that could be transformative. They start by learning and developing expertise in the technologies and trends that will shape the future of their industries, Furr notes.

Three questions innovators should ask are: what will customers want next, what trends are shaping the world over the next few years and what will emerging technologies allow us to do that we couldn’t before, he says.

Lowe’s, a traditional US retailer, brought in a team of science-fiction writers to shake up thinking among its conservative top team. The team was challenged to see how it might take advantage of augmented reality, robotics and other technologies to transform its retail offering. It provided what Furr calls “speculative organisational fiction”, with disbelief suspended long enough to do something meaningful.

Among the results was that Lowe’s deployed robots in-store to take inventory, created exosuits (external robotic skeletons) that help workers do their jobs and launched innovative 3-D printing services.

The capacity to leverage networks is another important determinant of success. Surprisingly, Furr says research shows that weak ties rather than strong ones often produce the best effects. This runs counter to the idea of the primacy of the so-called Dunbar number which suggests we can maintain strong relationships with only a maximum of 150 people.

The reason, he says, is simple – it’s down to scale. Because of network effects, the volume of resources available through weak ties completely dominate the volume of resources available through strong ones. Many of the key steps Mark Zuckerberg took in the technical development and funding of Facebook, for example, were facilitated through second- and third-degree contacts rather than his primary network, he notes.

When it comes to building your reputation for innovation, the authors suggest the most valuable thing you can do is to be a founder. This does not have to involve quitting your day job, as up to half of all successful projects start as hybrid or sideline projects, they suggest. It can also be done in the form of corporate entrepreneurship by launching an innovative project in your firm, preferably a visible, challenging project.

Another technique is to build your reputation by ‘borrowing’ through associating yourself with high-prestige individuals, projects or academic institutions that lend you credibility.

Finally, they suggest building a reputation for scrappiness, the quality of doggedness that enables you to get a lot done with few resources. Although it is easy to tell yourself that you could get a lot done if only you had the money, the smartest entrepreneurs find innovative ways to accomplish a lot with the little that is available to them.

Amplifiers that strengthen support for an innovation project

Materialising: making abstract ideas tangible works because people tend to believe an idea more when they can see and touch it as opposed to it being an abstract concept.

Comparing: employing relevant analogies to link your idea to something familiar and successful. Works because it gives listeners a reason to believe in your idea in light of something they already understand.

Committing: signalling that you believe in your project so much you are willing to put yourself at a significant risk in supporting it, encourages others to support it too.

Fomo: generating a fear of missing out that involves creating a sense of urgency, scarcity or exclusivity which switches potential supporters from a critical evaluative mindset to an acquisitive mindset eager to capture the opportunity.

Innovation Capital – How to Compete and Win Like the World’s Most Innovative Leaders, by Jeff Dyer, Nathan Furr and Curtis Lefrandt, is published by Harvard Business Review Press.