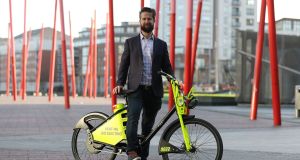 Moby, the State’s first electric bike-sharing scheme, is seeking to raise €300,000 in a crowdfunding campaign.

The investment will be used to fund the start-up’s fleet expansion and to potentially roll out services in other cities both here and in Britain.

The start-up is licensed by Dublin City Council to operate 1,000 electric bikes in the city, which the company estimates has the potential to replace 10,000 car trips a day.

Its new fundraising campaign, which has just launched on the Spark Crowdfunding platform, is aimed at paying for 200 more electric bikes, with any additional investment secured to be used to help the company obtain a minimum of 1,500 bikes in its fleet by 2023. This would give Moby sales of €7 million a year based on its revenue projections. Ideally, the company is aiming to have double that number of bikes on the road by that time.

Having reached 4,000 registered users who have cycled more than 100,000km in its pilot phase, revenue is trending at €7-€10 per day per bike, which is estimated to grow from two to six journeys per bike per day over three years.

Mr O’Connell said Moby was exploring expanding in Cork and Waterford, as well as in Bristol and Milton Keynes in England.

“I love the idea of using crowdfunding to raise finance for this business. Our customers can become our investors and our investors our customers and in this way it really helps promote the scheme as we get a lot more people involved and wanting to make it a success,” he said.

The new equity crowdfunding campaign forms part of an investment round expected to reach €1.5 million. Moby has already secured €600,000 of debt/asset finance and €270,000 in equity commitments.

Mr O’Connell has invested some €170,000, while well-known tech entrepreneur and investor Brian Caulfield is also backing the company. Other backers include the Halo Business Angel Network (Hban) and Sean Mitchell, who co-founded technology Movidius, which was acquired by Intel in a multimillion euro deal four years ago.

Investments qualify for the State-backed Employment Incentive and Investment Scheme (EIIS), which means investors will get 40 per cent of their investment back in year one.

“I’ve been working as an adviser to Moby for almost a year now and have watched as the company has progressed. The early figures are very exciting and I believe we are at the start of a huge wave in shared micro mobility,” said Mr Caulfield.