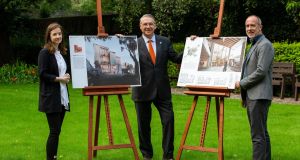 Dublin-based Henry J Lyons Architects has been selected as the winning entry in the Ireland House Tokyo design competition, the Department of Foreign Affairs and the Royal Institute of the Architects of Ireland have announced.

Construction of the building is now scheduled to take place in Tokyo from March 2022 to March 2024.

Ireland House Tokyo, a project with an estimated cost of €21.4 million, will be the centre of Ireland’s presence in Japan and serve as “the heartbeat of the Irish community” in the third-largest economy in the world, the Department of Foreign Affairs said.

“The selection of this design is just the first step of this project. The new Ireland House will support a deeper and broader partnership with Japan in the decades to come, and help drive new opportunities for Irish business in the region,” said Niall Burgess, secretary general of the department.

It will host the Irish Embassy as well as State agencies such as IDA Ireland, Enterprise Ireland, Bord Bia and Tourism Ireland.

“The winning design by Henry J Lyons Architects imaginatively fulfils our vision by delivering a welcoming and vibrant symbol of Ireland in Japan.”

Royal Institute of the Architects chief executive Kathryn Meghan said the organisation welcomed the investment by the Government in architecture-led design.

The winning entry by Henry J Lyons “captures the essence of the brief that Ireland House should be a building that represents the spirit of Ireland, including all aspects of its heritage, culture and Ireland’s position as a modern nation within the contemporary world”.