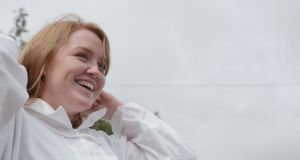 Niamh Damery, of the University of Limerick, national winner of the James Dyson Award

Niamh Damery, a 22-year-old student from Cork, has been announced as the national winner of the James Dyson Award for a project that attempts to solve the problem of the declining population of the native Irish black bee.

Ms Damery, a student at the University of Limerick, harnessed natural materials to create a conservation hive called the Econooc. This self-assembly hive “biomimics” the shape of a tree hollow, this being the perfect shape for bees to move around in a cluster during the winter months.

The base of the Econooc is made from mycelium, which is grown from mushrooms, and is similar to polystyrene, while also having natural substances that give the bees an extra defence against the varroa mite that can carry viruses into the hive. The hive also comes with a calendar that teaches the user about biodiversity and how to create a more diverse garden.

“Although bees are so small, they play a huge such a huge role in nature and the environment all around us,” Ms Damery said.

“My dad kept bees, as did my grandfather before him, and I’ve always been surrounded by bees and had a love for them. With the commercialisation of beekeeping, many are importing other strains of bees which are breeding with the Irish black bee, and these strains are not able to survive in the Irish weather as well as the black bee.”

It is estimated that a third of all bee species in Ireland could be extinct by 2030, causing a crisis for wildlife and horticulture.

Ms Damery said she hoped the Econooc would encourage more people to think about nature and how to ensure the survival of bees. “As designers I think we have the power to make both big and small changes, but also make changes in people’s mindsets with what we design and how we design it.”

This is the 16th year of the James Dyson Award, which champions groundbreaking concepts in engineering and design. The competitions, which run in 27 countries, are open to current or recent design and engineering students.

Ms Damery will receive €2,000 for her project, which she aims to invest in advanced prototyping and further research. She will also progress to the international stage of the award.

“We were unanimously drawn to Niamh’s creative innovation around this urgent issue of the declining bee population in Ireland,” said one of the judges, Barry Sheehan, who is head of design at Technological University Dublin.

The two runners-up were Peppy by Keith Fitzsimons of the National College of Art and Design and Enso – The Guided Play Toolkit by Vinh Truong from Technological University Dublin.

Peppy is a product that incentivises children with cystic fibrosis (CF) to practice airway clearance therapy through the use of playful attachment. It also functions as a spirometer, meaning it records the user’s lung function levels and logs it on an app.

Enso is a 3D printed toolkit that engages children in guided play lessons and trains educators to be play facilitators. It is designed to be adaptable to the primary curriculum and educational play policies worldwide.