Could hydrogen be our fuel for an uncertain future?

Toyota was one of 18 multinationals that came together at the latest UN climate talks in Bonn to launch a strategy for adopting hydrogen as a fuel for the “world energy transition”. Video: Toyota 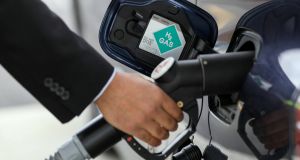 The possibility of hydrogen as a fuel of the future has lurked in the background for years. Its merits as a clean, efficient fuel were indisputable but it was quickly dismissed on safety and cost grounds.

The safety issue was addressed. Infrastructure costs, however, remained stubbornly high. And the cost of generating the gas, its storage and distribution to fuelling stations were prohibitive.

Intriguingly, some in the motor and fossil fuel sectors continued to talk about “what ifs”. At the very least, it was as if they were staying in the game as a small side bet – to ensure they had the know-how if blockages to viability were somehow obliterated.

In less than two years that scenario has changed. Market conditions are in upheaval mode as growth of renewable energy sources is accelerating and their cost of production has declined at quicker rates than anticipated. The move to a decarbonised world is happening. In that scenario hydrogen as a fuel for use beyond motoring has forced its way on to the agenda.

At the latest UN climate talks in Bonn those business interests gathered under the auspices of the Hydrogen Council (set up in Davos earlier this year) and unveiled their plan for a scaling up of hydrogen in the world’s transition to sustainable energy use. The side-bet club had become an alliance of leading companies already investing in hydrogen value chain – 18 multinationals including Toyota, Alstom, BMW, Royal Dutch Shell, and Mitsubishi Corporation, representing annual revenues of more than €1.5 trillion and employing two million people worldwide.

Its approach, they believe, would deliver decarbonisation of transport, industry, and buildings, and enable a global renewable energy production and distribution system around hydrogen. To realise this vision, it stressed that investors, industry and government needed to ramp up and co-ordinate their efforts. It predicted hydrogen could account for a fifth of all energy consumed by 2050 and meet 20 per cent of 2050 CO2 emissions reduction targets.

The council set out some likely striking milestones for 2030:

* One in 12 cars in Germany, Japan, South Korea, and California will be powered by hydrogen;

* Deployment of hydrogen-powered trains and passenger ships will have begun.

Their prediction of what it could mean by 2050 is dramatic: 400 million cars, 15 to 20 million trucks, and about five million buses, which constitute on average 20 to 25 per cent of their respective transportation segments. It claims hydrogen is much better suited to store energy for long periods of time than electricity. Renewable electricity can be stored in the form of hydrogen to enable it to last much longer and be suited for use throughout the year, especially as energy use peaks in the winter.

Research fellow at UCC Environmental Research Institute (ERI) Dr Paul Deane says the technology exists. There are multiple sources of hydrogen, but “the cost challenge” still stands out. But with more and cheaper renewable energy available – especially wind and solar with reduced associated costs – there is an opportunity for hydrogen.

Researchers at UCLA in California announced this month they have created a device that converts solar energy into usable and storable power that could be fed into a hydrogen fuel cell to power an eco-friendly car; just one illustration of how hydrogen might fit in. What’s more, the device would be affordable, its designers insist.

In the current competition between electric cars (EVs) and hydrogen-fuelled cars, EVs have the upper hand on cost and market visibility grounds, notes Deane. In battery terms, the hydrogen fuel cell has stronger potential in terms of vehicle range and ability to power larger vehicles such as heavy trucks.

The ERI has published a study on the role of hydrogen in low-carbon energy futures. The best way to produce hydrogen it concludes, for example, is in discrete hubs, especially where “captive” vehicle fleets are located such as buses or trucks that start and finish at the same place every day. That way, there is no need for costly fuelling points, explains Deane.

Hydrogen use in transport is increasing from a low base, but what has changed is market outlook since the 2015 Paris agreement on climate change, combined with the cost of renewables. There is much great ambition for adopting decarbonising technologies; Paris requires going much further by way of “deep decarbonisation”, he says.

Some hydrogen business models are overly simplified, he says, and based on unrealistic projections such as use of electricity from renewable sources at zero cost. Hydrogen’s use in energy systems is complex as a result of its relationship with other energy sources.

The UCC research team applied models based on “cheap electricity”. Hydrogen still comes to the fore though it pushes the market out by a number of years. In short, before Paris, hydrogen would not have been needed in the energy mix. Post-Paris, there is a specific requirement to replace fossil fuel use, and in heavy freight completely.The outlook up to 2050 is still a bit up in the air, according to Deane, but he adds: “If we want a clean future, we have to accept hydrogen will play some role.”

Not only that, it goes beyond transport, and Ireland is particularly well placed in one respect. Our gas distribution network is “nearly hydrogen-ready” as a consequence of replacing steel piping in the network with polyurethane pipes some years ago. Irish utility Ervia is looking at deploying the infrastructure for home heating – a concept at development stage in Leeds in the UK. It involves using renewable electricity or natural gas to develop hydrogen gas, which is used like natural gas, and resulting carbon is captured and stored.

UCC analysis shows that while transporting hydrogen remains a challenge, it offers a range of wider decarbonising options. No radical new technologies are needed. And it’s not a case of it being easier for bigger economies. Ireland has a particular advantage being able to produce electricity from renewable sources so cheaply, having “one of the best onshore wind resources in Europe”.

The analysis suggests hydrogen emerging mainly after 2030, though the advent of the hydrogen-fuelled car is imminent. Fuelling stations are expensive, ranging at up to €2 million, but their cost has halved in the past decade. Carmakers are undeterred.

Hyundai recently announced its new “H2-powered car”, will have an 800km range on one tank of hydrogen. Early adopter Toyota – with its Mirai hydrogen car already on sale in some countries – is of the view hydrogen-fuelled cars, buses, and trucks with no carbon emissions are going to be part of the mix in the electrification of motoring that “will increase dramatically after 2020”.

The vehicles’ environmental credentials are enhanced by the ability to generate hydrogen by a process of electrolysis powered by renewable energy sources – such as wind, solar or hydro power – and then stored for use. This fits well with Toyota’s intention to have all aspects of its business decarbonised by 2050.

Takeshi Uchiyamada, chairman of Toyota Motor Corporation and co-chair of the Hydrogen Council, says “hydrogen is an indispensable resource to achieve this transition because it can be used to store and transport wind, solar and other renewable electricity to power transportation and many other things”.

The council is frank about the scale of what’s required. “Building the hydrogen economy would require annual investments of $20 billion to $25 billion for a total of about $280 billion until 2030,” it suggests. “About 40 per cent ($110 billion) of this investment would go into hydrogen production of hydrogen, $80 billion into storage, transport, and distribution, and about a quarter ($70 billion) into product and series development and scale-up of manufacturing capacity.”

The remainder could go into new business models, such as fuel-cell-powered taxi fleets and car sharing, on-demand transportation of goods, and contracting of combined heat and power units. Within the right regulatory framework and incentive policies attracting these investments to scale the technology is feasible, it adds.