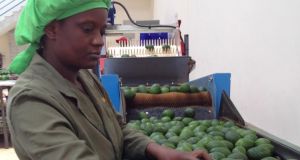 The TruTrade platform is now being used in Uganda and Kenya, most recently to open up a direct European market for avocado farmers.

A cashless trading platform developed and operated by an Irish organisation is giving African farmers substantially better prices for their crops while encouraging the development of microeconomies that benefit women and their families.

The award-winning TruTrade initiative, developed by parent organisation Self Help Africa – which merged with well-known Irish aid organisation Gorta three years ago – uses a unique mobile-enabled trading and payments platform to secure fair prices for produce grown by farmers, many of them women, in sub-Saharan Africa.

Most farmers in the region eke out a living on underproductive land and are at the mercy of traders who travel through remote areas buying up small quantities of produce from individual farmers to fulfil contracts.

But, says Self Help Africa chief executive Ray Jordan, traders typically offer very low prices, knowing the farmers – many of whom are dispersed through remote regions, far from access to markets – have a narrow window in which to sell their produce before it goes off. Most have no choice but to accept the paltry prices offered.

“If you have a surplus – say, 10 bags of a commodity – you’ll sell rather than leave it to rot. The problem in Africa is that your transport is a bicycle and the market is 30 miles away,” he says.

“So how do you increase the profit to farmers, when the profits are disappearing into the hands of traders?”

With an interest in moving “outside the farm gate” – into initiatives that can help farmers increase their profit that go beyond simply improving farming methods – Self Help Africa/Gorta came up with TruTrade, a company majority owned by Self Help Africa.

Using a mobile platform developed for Self Help Africa by an African information technology company in Uganda, the company now operates to negotiate large contracts for commodities, then hires traders to fulfil the contracts. But the traders never negotiate the price, handle cash or make payments to farmers.

Instead, the farmers, who are each given their own identification number, are paid directly by TruTrade at a guaranteed price, using text notifications and cash transfers that go from TruTrade into the farmers’ accounts.

This is possible because bank accounts and transfers accessed via mobile phone are popular in Africa. The trade is entirely mobile- and software-enabled.

One importer they work with is Irish-operated Devinish Nutrition in Uganda, which produces grain-based animal feeds.

Once TruTrade has a purchase order, it goes to traders and offers them the opportunity to fulfil a far larger contract than they would if operating alone, for a guaranteed payment.

“Now, for the trader, I’m de-risking that operation. I’m giving them open-ended liquidity,” he says. “Now their only challenge is to source volume and quality.”

Arriving at the farm gate the trader arranges to buy an amount of produce, then sends a text through the TruTrade system noting that, say, farmer number 1234 will supply 20 tonnes of soybeans.

“We receive the text and wire the money to that farmer’s mobile account.”

TruTrade operates as a for-profit organisation, taking a percentage of the overall contract payment – say, 5-6 per cent – and offers 4-5 per cent to the trader, while the remainder goes directly to the farmer. Over the past three years, on average TruTrade has increased farmers’ premiums on crops by 25 per cent, Jordan says.

“What we’re doing is cutting out the middleman,” as well as the risk for TruTrade that any rogue traders might abscond with cash intended for farmers.

Since January, the organisation has recovered 100 per cent of the financing used to develop the TruTrade platform.

And the system has additional benefits, Jordan says. Now, a record exists for the transaction for a specific farmer in a specific location.

“So we’re giving farmers visibility and accountability in their supply chain,” he says. In the past, such small farmers, who are often women, had no visibility because the trade system was small-scale and transactions were in cash.

“So they can’t get loans or move their money through any financial institutions. But now, this system is effectively moving them into a digital transactional model.” The initiative has encouraged many more women to open mobile bank accounts and create a personal mobile and banking history. They are then able to take out small loans for sending children to school, or to further develop their farms, he says.

“Traders get a guaranteed commission of around 4 to 5 per cent. They also get increased orders and we unlock larger markets.”

But what’s also exciting is the shift in who is working as a trader, he says. In the past, the role was overwhelmingly male.

“You don’t get a lot of women trading in sub-Saharan Africa, because of the danger of handling money alone,” he says. “But it’s not a security risk any more. It’s a collection business.”

He says TruTrade focuses on women, “as putting extra income in a woman’s hands has far greater benefits for her family than seeing that income in a man’s hands”. African women traditionally have been far less likely to have bank accounts “and as a result, are disempowered”. Some 70 per cent of agricultural labour in Africa is performed by women, he notes.

Recognising TruTrade’s role in bringing more women into trading and broadening the financial inclusion of women, the Massachusetts Institute of Technology recently chose TruTrade as a winner in the “women and technology” category of its Solve Challenge competition, which attracted nearly 1,000 entries from 103 countries.

The platform is primarily cloud-based, and hosted on Amazon’s Linux infrastructure. Jordan says it came about through trial and error over three years of development and use.

“As recently as 12 months ago, we had to scrap the original software platform and start all over again,” he says. That’s when they contracted it out to African developers, who produced the current platform with its integrated database of farmers.

The platform is now being used in Uganda and Kenya, most recently to open up a direct European market for avocado farmers. TruTrade negotiates a purchase order with importers in the Netherlands, and farmers, who typically were paid three to four Kenyan shillings per avocado, now receive 11 shillings (nine cent).

“We can also show the importers that we have the name of every farmer supplying those avocados,” providing enhanced traceability.

TruTrade is looking next at expanding into Malawi and Tanzania, which have well-developed mobile banking systems in place already.

“At our core, we’re not a technology company, we’re a self-help organisation in Africa,” Jordan says. “This is a stretch for us. But it’s working.”