Can you free up time spent eating with Europe’s answer to the Soylent craze? 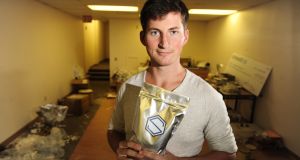 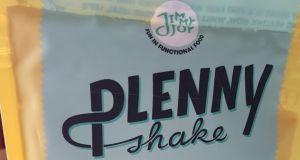 Plenny Shake: a thin gruel like a watered-down Ready Brek. It’s quite palatable. The banana flavour is decent and it does fill you up.

Soylent and other meal replacement powders are like Marmite but not in the sense that people either love or hate the taste. There are the fanboys that consume the branding with the same gusto as they do their futuristic fluid meals and the sceptics who worry this is another step towards corporate enslavement now office workers can forgo meals in lieu of the 21st-century liquid lunch “al desko”.

These nutritionally-enhanced powders don’t just come packaged in plastic, they are also wrapped in the Silicon Valley ideology of work hard, hold the play. Is this race for productivity dangerous or is there a lesson to be learned from the tech industry about efficiency?

I am pondering the fact that Soylent, despite only being on the market since 2014, has already received $74.5 million in funding from Silicon Valley investors including Tao Capital Partners who also invest in SpaceX, DeepMind (Google’s machine-learning division) and other emerging technologies. Maybe it’s time to eat like a tech entrepreneur and then, perhaps, I will be able to think like one.

After all, Elon Musk, a platinum-level tech entrepreneur, has said in the past: “If there was a way that I couldn’t eat so I could work more, I would not eat. I wish there was a way to get nutrients without sitting down for a meal.” In fact, the recipe for Soylent first emerged when founder Rob Rhinehart shared it on a hacker forum. This is not about nutrition, it’s about a lifestyle of “too awesomely busy to eat food”.

Soylent, however, does not ship to Europe. In fact, it doesn’t ship to Canada either since October 24th when the Canadian Food Inspection Agency (CFIA) banned it due to it not meeting the “compositional requirements for meal replacement products”. So, I looked around for European alternatives and that’s when I spotted Jimmy Joy – originally named Joylent but the name changed “after a small dispute with our colleagues in the States”, according to chief executive Sam Rohn.

Anyway, I reached out to Jimmy Joy and they kindly offered me a week’s supply of their meal replacement powders and two packs of their meal bars. So, I decided to try and live life to maximum efficiency for a week. With no meals to prepare, I wonder what I could accomplish?

The Plenny Shake wasn’t as sweet and cloying as I expected it to be. It’s more like a thin gruel – think watered-down Ready Brek. I know that sounds unappetising but it’s quite palatable. The banana flavour is decent and it does fill you up; I wasn’t hungry until lunchtime. I decided to try their Plenny Bar for lunch. This is a solid lump and feels heavy; kind of like dark matter but vanilla-flavoured. But it was nice to have a non-liquid meal so I kind of enjoyed it. And best of all. No dishes! I wonder if I’ll be singing the same tune tomorrow or the next day?

I didn’t have coffee yesterday and this was a mistake. Soylent and Jimmy Joy fans probably already know this but don’t be so efficient that you eliminate your daily caffeine fix. I had a mango-flavoured shake for breakfast but I had trouble drinking it all at once; if you’re not a breakfast person it’s a lot of liquid. Again, I was glad to have the option of an energy bar for lunch. It makes it less obvious in an office setting that you’re trying a Silicon Valley-inspired diet, especially with the noisy shaking required to mix the powder with water.

Uh oh, strange tummy rumblings after lunch on day 2. Maybe my body is missing all that potato and pasta it normally gets? Still though, I actually feel pretty motivated and I have time to spare. I reorganised my closet at lunchtime and went for a walk at dinner time so you could say that Jimmy Joy is upping my productivity. But at this rate I’m kind of expecting myself to have created a tech start-up by the end of the week. Is that too much to expect?

It’s the end of day 2 and I’m fine but it feels boring and lacklustre to not have dinner to cook and look forward to. I use the time to read up on Jimmy Joy’s nutritional content. That’s when I realise that three shakes a day equals 2,100 calories. This is fine for the average active person but not someone with a desk job. The 3½ scoops per meal will have to drop to three. Which is okay except that I must now take an additional vitamin supplement because I have also cut out some of the nutritional content along with the calories.

Am I the next Elon Musk? I just thought of an idea for a smartphone cover that has adjustable slots to fit over the camera lenses and microphone to protect against hacking. I think I’m becoming more paranoid than anything. And I am missing actual food. Still, I’ve had a fairly productive day.

Early evening is not pleasant. Jimmy Joy seems to be hard on my stomach as evidenced by ominous gurgling noises. I’m also cruising the web looking at pictures of sushi, pasta dishes, hell, even toast is making me drool. I begin to wonder if Epicurus was right; life is about the pursuit of physical pleasures like food and drink. Start-up be damned. I spend the evening sulking.

This is my last day; I can’t endure an entire week. My stomach is not enjoying the Jimmy Joy regime. Even though I like the taste and don’t mind the texture, I suspect the Plenny Bars may be too heavy – or perhaps I’m drinking the shakes too quickly at dinnertime. All I know is that a diet composed entirely of meal replacements doesn’t work for me and is, ultimately, joyless.

I’m a glutton for punishment and decide to try the shakes one more time without the bars. My stomach seems okay now but the world has turned grey. I don’t think it is possible to be creative and productive without the joy that food brings. I’d still consider grabbing the odd shake on the go; these kinds of meal replacements are great at a pinch when there’s no time for breakfast or lunch but not as a long-term solution to eating meals.

There are, of course, ethical arguments for consuming meal replacement concoctions in favour of an unsustainable future of heavy meat consumption and wasteful use of fruits and vegetables. This is how Rheinhart has recently framed Soylent. In an interview with science populariser Neil DeGrasse Tyson, he said: “That’s a very real problem: about population growth and burdening the Earth’s resources. I think we need to take these problems very seriously.”

But this isn’t how it started and I’m pretty sure ethical vegans are not his target market. Rheinhart has always pushed Soylent with a personal philosophy that wanting or craving food is somehow backwards, disgusting and animalistic in comparison to embracing “the future of food” like the good technologist that you should be. He has even referred to juices and smoothies as “archaic”. I know, pistols at dawn for the health brigade.

“I have not set foot in a grocery store in years,” he has said.

“Nevermore will I bumble through endless confusing aisles like a pack-donkey searching for feed while the smell of rotting flesh fills my nostrils and fluorescent lights sear my eyeballs and sappy love songs torture my ears.”

Nutritional visionary, snake-oil salesman, or elitist Valley naif? You decide. I’ll leave you the words of late-night talk show host Stephen Colbert who asked Soylent chief executive Rhinehart: “What was the inspiration for this? Did you see someone in a coma with a feeding tube, and you thought, ‘I’ll have what he’s having’?”