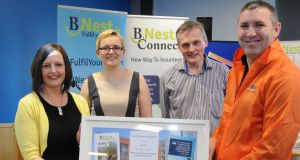 Early last year, businessman Eamon Ryan was sitting on a bus in Tanzania bending a friend’s ear about the lack of support for start-ups with a social purpose. Having listened at length, his buddy told him to stop bellyaching and to do something about it. Suitably chastened, Ryan founded BNest, a self-funded social enterprise incubator based at the Nexus innovation centre at the University of Limerick.

Nine enterprises participated in the incubator’s inaugural programme in September last and a further 10 have been selected to take part in the next one. Enterprises in the first group included Doonmoon Care Farm, which helps those recovering from mental health problems; Meitheal Le Capaill, an equine assisted trauma therapy enterprise; and Siúl Eile, which connects people to their local area and to each other through walking.

“As far as I know we are the first fully-fledged social incubator in Ireland and our first group came from a broad spectrum of social enterprises – some at concept level, some well established and some thinking of scaling up,” Ryan says. “The idea was to create a peer group with shared experience who could help each other. Indeed, something extraordinary occurred around this. Start-ups are inherently selfish endeavours as time is critical. People are willing to help others, but usually in a limited way. Social enterprise appears to be quite different in this regard. There was an incredible openness to helping each other and the struggle we expected to get peer learning to happen effectively turned out to be no issue at all.”

Ryan is an engineer by profession and a seasoned manager in the multinational technology sector. Ten years ago he decided to step away from hands-on management to become a business development consultant to SMEs. Ryan is a mentor for Enterprise Ireland and has personal experience of four Irish and overseas incubators, two as a participant and two as a contributor. He wanted BNest to reflect the best of all four while tailoring its orientation specifically for socially-based start-ups.

Nurturing the person behind a start-up is not something most commercial enterprise programmes do. Their focus is firmly on the viability of the idea. At BNest, however, it is seen as an integral part of the entrepreneurial process.

“Start-ups are one of the loneliest and isolated places, with huge and rapid changes in fortunes, very high work rates and not an insignificant level of stress,” Ryan says.

“This is why without a strong sense of passion it will be hard to persevere. As hard as this is in the commercial space, it is even more intense in the social space because of people’s deep personal motivation, which makes it almost impossible for them to give up. For this reason personal resilience is an important part of what we do. That said, we also cover off all the skills and tools people need from finance and people management to business planning, strategy, pitching and good governance.”

Where the BNest programme differs from a conventional new business course is that it doesn’t “teach” its participants these skills. Instead it puts practical need ahead of theory and promotes self-learning by helping participants grasp the principles of finance or planning by connecting them directly to their business.

“Our job is to strip away all the start-up jargon and deliver something that people can relate to without feeling they are disconnecting from their purpose. For this reason they always work on their own enterprise or on those of their fellow participants,” Ryan says.

This peer-based learning is crucial as the most effective learning comes from sharing real experiences with people they can directly relate to and who can offer real support. All start-ups need at least two people in the background, the cheerleader who encourages them and the person who provides the equivalent of a cold shower to bring them back down to Earth.”

Ryan says social entrepreneurs also have to think differently about their businesses because there is likely to be an extended network of people with whom they have to engage in order to drive it forward. For example, an enterprise working to help those on the autistic spectrum find employment is not just dealing with the individual, but also with their family, employers, State bodies and the education service.

“Not all of these groups may even be supportive of their efforts, but to succeed the social entrepreneur needs to be able to manage those involved and focus on building user engagement and developing messages they might respond to,” Ryan says.

BNest has been given a home by the University of Limerick where participants have access to the full facilities of the Nexus innovation centre. The venture is being philanthropically funded for the next three years at a cost of about €20,000 per programme, while participation is free for the enterprises selected.

“We do not believe charging people is practical in the social space,” says Ryan, who runs the incubator with colleague and marketing consultant Kasia Zabinska. “Equally, though, it should be noted that there is no official financial support available for social entrepreneurs. BNest is itself a social enterprise in the making and we made a decision to self-fund in order to develop the programme we believe is the right one. With outside funding comes restrictions and people telling you what to do. As we take a very different view of the start-up world, we needed the freedom to do it our way.

“In keeping with its focus on innovation, the Nexus centre has been hugely supportive and sees the diversity of a programme such as ours as being beneficial to the innovative forces they are fostering,” Ryan adds. “Like our participants, we too are on a voyage of discovery and want each iteration to influence the next. However, over the next three years we will need to develop a viability path for BNest to self sustain into the future.”