If bigger music gigs go ahead indoors, why not business events?

All across the economy, people want to get back to earning a living, not just in the arts 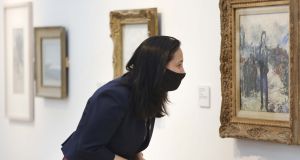 Minister for Arts Catherine Martin viewing a painting as she visits the Jack B Yeats exhibition in The Model in Sligo in August. Photograph: Leon Farrell / Photocall Ireland

The Government runs the risk of fashioning a rod for its own back, if rumours are correct that indoor music gigs may be allowed as long as alcohol isn’t served. If boozy behaviour is fingered as the real problem with people congregating indoors in numbers above six, then Ministers should expect a stampede of lobbying from all corners of the economy where dry events are the norm.

If alcohol-free music gigs are allowed to go ahead, then why not alcohol-free trade events? What about sales seminars or company annual general meetings, or holiday home exhibitions or staff training events?

Why would the organisers of any indoors event capable of proceeding without alcohol, such as conferences or trade shows, quietly accept their effective prohibition (which an indoors limit of six people essentially ensures) if special allowance is made for the arts?

Has somebody suddenly discovered that the virus is a teetotal culture vulture?

The consideration of larger music and arts events by Government was first reported in The Irish Times on Monday morning. Minister for the Arts (and much else besides), the Green Party’s Catherine Martin, didn’t go out of her way to deny it when she later tweeted that she had a “positive and productive” meeting with the Arts Council, Minister for Health Stephen Donnelly, and acting chief medical officer Ronan Glynn.

She promised to “continue our engagement with the arts sector to find safe ways to get the arts community back earning a living”. Martin, Donnelly and their Cabinet colleagues would do well to remember that lots of people, all across the economy, want to get back to earning a living, and not just the arts.

The raucous weekend scenes of boozy bad behaviour on the streets of Killarney suggest the Government may not be completely wrong to harbour concerns over people’s capacity to congregate safely after the consumption of alcohol. But an arbitrary limit on indoors gatherings of just six people still looks to be beyond draconian. It may yet turn out to be an overly-harsh constraint on ordinary, economic life with little payoff in terms of fighting the virus.