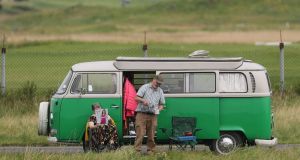 With the Government advising against foreign travel, the pandemic has resulted in a so-called ‘staycation’ boom. File photograph: The Irish Times

With the Government advising against foreign travel, the pandemic has resulted in a so-called “staycation” boom.

The Central Bank’s latest credit and debit card statistics show total card spending, including ATM transactions, equated to €5.8 billion in July, up 6 per cent on the previous month, but 5 per cent down in year on year terms.

Within this, the accommodation and transport sub-sectors recorded month-on-month growth rates of 160 per cent and 24 per cent respectively.

As the third phase of restrictions were eased in late June with the reopening of restaurants and some bars, spending in the social sector increased by 35 per cent in July, compared to the previous month, said the bank.

The restaurants dining sub-sector increased by 56 per cent and accounted for the vast majority of overall increase in the social sector, it said.

Spending on entertainment was also up on the month, recording an increase of 10 per cent compared to June.

Have people ramped up savings?

“Spending across sectors fluctuated greatly over the past number of months. It is evident that as the various phases of restrictions were eased, spending in all sectors has increased as the opportunities for consumers to spend has risen,” it said.

Despite the rise in spending in some area, consumers have used the restrictions to save more.

Lodgements by Irish households exceeded withdrawals by a record €11.8 billion in the year to July, the bank said.

As a result of the restrictions, households here have been able to save money they would have normally spent on areas such as childcare, transport and recreational activity.

Whether they hoard or spend these savings is likely to have a big impact on the speed of economic recovery.

Consumer lending outside of mortgage lending declined by €116 million in July. Annually, repayments exceeded new lending by €591 million over the year to end-July. This was the largest excess of repayments over gross new lending seen since 2015, said the bank.