‘We’re not even using the UK as a landbridge’

Ger Brennan, who runs the Irish operation of MSD, is Brexit-ready and focusing on other issues 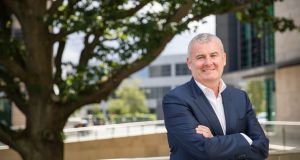 Ger Brennan, who trained as a nurse, was keen to merge his medical interest with sales. After ‘a hundred PFOs’ applying to be a medical rep he landed a contract job with Bayer

Brexit doesn’t worry Ger Brennan. It’s a startling take from an industry leader, given how much the relentless uncertainty over the manner of the eventual rupture has dominated the focus of business leaders and policy chiefs. But in a week when it appears EU and British leaders have finally found a formula to allow the UK to leave the trading bloc in a somewhat ordered fashion, Brennan is spending his time worrying about other items in his in tray.

“This is not arrogance but, as of today, it is not an issue for us because we have controlled Brexit,” says Brennan, who runs the Irish operations MSD, the fourth-largest drug company worldwide in terms of market share.

Just a day after the outcome of the UK referendum was announced in June 2016 Brennan was in London where the company’s European leadership team had been convened. “At that time, we made a decision to plan for a hard Brexit,” he recalls.

At the time, about 70 per cent of MSD’s product for Ireland was labelled jointly with the UK.

“We made the decision to decouple,” he says. “And I remember sitting with the Department of Health just before Christmas [2018] and they asked me the question, are you ready for Brexit? And I said yeah, but we had to plan two years ago. So, all our supply now is coming through Belgium. We’re not even using the UK as a landbridge.”

For the first six months of this year, the company ran two parallel stock supply shipments just to ensure that the new system worked. The target date was always March 2019, not October 31st.

“We just could not take the risk. We thought we’d have some sort of resolution by now but I wanted to ensure that no Irish patient will be impacted.”

That second half of 2016 was a baptism of fire for a man who was only just starting into the role as MSD’s main executive in Ireland but he argues that the work he and his team put in then, and over the subsequent two years, means Brexit is not a worry now.

Brennan has plenty of other issues to occupy his time. MSD produces two top-selling cancer therapies – the immuno-oncology drug Keytruda and the HPV vaccine Gardasil 9 – and the company’s Irish operation are involved in both.

The rapid growth of both has seen the company invest heavily in its Irish business – both in Carlow, where Gardasil is produced, and in Swords, where the company is transforming its former women’s health products plant into a Keytruda production facility, renamed MSD Biotech.

The importance of Ireland in the MSD group – or Merck as it is known in the United States – was emphasised last month when its board met for the first time outside the United States, in Carlow.

MSD has five sites in the Republic – Swords, Carlow, Brinny in Cork, Ballydine in Co Tipperary, and in Dublin – employing more than 2,300 people from 40 countries. It has announced 800 additional jobs in the past 15 months. Of those, more than 500 are now filled and the group is comfortable it will meet its target for the remaining roles by 2021.

The recently completed expansion at Carlow and an earlier project to future-proof Brinny, alongside the ongoing redevelopment of Swords will bring to $3 billion the amount invested by MSD in Ireland over its 50-year history here.

“We have to think five to six years ahead in relation to where can we get our key medicines at the appropriate time for the patient when they need them,” says Brennan. To do this, the company has brought an increasing portion of its manufacturing back in house.

Keytruda is already the fourth-best selling drug, with revenues last year of more than $7.1 billion – an increase of close to 50 per cent. Already approved in different countries for 11 different cancers, it is seeking approval for a range of other indications. By 2025, industry analysts expect it to be the top-selling drug worldwide. Just this year, it has secured access to the Chinese market, which is finally trying to get to grips with cancer.

Sales of Gardasil are also surging – up 35 per cent year-on-year in the first half of 2019 – with use of the HPV vaccine growing in the US, China and in Europe.

“Vaccines are a huge challenge for a company like ourselves because you need to be able to figure out the demand but the manufacturing process for vaccines alone is three years,” says Brennan. “So, you decide today that I need to build, double Carlow, for global demand.”

The Carlow plant will be producing the vaccine for a range of international markets, including China “and we have to plan that ahead”.

Brennan is withering about the anti-vax movement, whose campaigns saw the uptake of the HPV vaccine fall from close to 90 per cent to a point where it was dipping below 50 per cent a couple of years ago, a point where critical herd immunity disappears.

“We had to address the myths and the conspiracy theories that were out there,” Brennan says. “All the clinical evidence is 100 per cent supportive as to why you should vaccinate against HPV.

“You probably saw Laura [Brennan]’s TV show. I get a lump in my throat even talking about it today. That lady was such an amazing lady. She pioneered that change.”

Brennan, who was just 26, when she died earlier this year, was a fearless advocate for the vaccine that might have saved her life.

“We will have to ensure that the right message permeates through and that we’re not going to allow the anti-vax message creep back up because it’s not true. It’s conspiracy theorists that’s coming through,” says Brennan, noting that vaccination rates are now back above 70 per cent.

While it works closely with the HSE and the Department of Health on messaging, MSD is careful of getting involved directly in the debate, especially on social media. Any queries or feedback staff have to what they read online is channelled back through the company to see how best it can be communication. Even Brennan’s tweets are vetted and legally approved before being sent.

The same applies to being seen to promote specific drugs. Along with other large drug companies in Ireland, MSD and Brennan are careful not to be seeing to promote specific products. Even in this interview, Brennan never name checks Keytruda, Gardasil or any of the company’s other drugs.

A nurse by training, Brennan was keen to merge this medical interest with sales, and looked for work as a medical rep. After what he recalls as “a hundred PFOs”, he landed a contract job, initially with Bayer.

He moved from there to Wyeth before being approached by MSD as Wyeth was merging with Pfizer in 2010. After a couple of years running a business unit in Ireland he was tempted by an international role with the company out of Switzerland.

Over four years, he graduated to regional and then leadership functions before getting a call to see if he wanted to return to Ireland – this time as a managing director and head of the country leadership team.

In that role, he has focused heavily on the collegial nature of the work his ever-growing team does rather than the format of it.

“I don’t need to see someone sitting at a desk doing their job. We’ve taken all the offices away. Everyone is open-plan now. So, there’s none of this ‘I’ll send you an email’. Get up and walk to their desk and talk to people. They like that. We’ve built collaborative spaces. People really enjoy that.”

Another smaller but, he argues, important initiative was to encourage staff to be comfortable in themselves. “One thing we introduced just as a sidebar, one line in an email, we said we’re changing the dress code. Come to work as you feel you need to be on that day. I’m in jeans and a hoodie most of the time in the office and people really enjoy that because it breaks down barriers.”

One big barrier Brennan does worry about is access to new medicines and affordability. It is a recurring bugbear in the industry.

“What’s the point of having innovation if a patient cannot get access to it?” he says. All sides now concede that the current reimbursement model for medicines is simply not working.

Combination therapies, personalised medicine and a greater focus on rare diseases mean the traditional models for pricing medicines is becoming increasingly irrelevant. At the same time, efforts to move towards a more outcome-based approach is stymied by the fact that Ireland’s hospital system – where most of these drugs are used – simply doesn’t produce the data necessary to make those assessments.

Multiyear funding and indication pricing (where the same drug attracts different reimbursement for treating different conditions depending on patient population and effectiveness) are two of the approaches Brennan wants to see. Most importantly, he wants any savings generated by a pricing agreement ring-fenced.

“Companies gave the money back as part of the [current pricing] agreement. Ring-fencing that is critical – and I would challenge today, was that money ringfenced? I don’t believe it all was ring-fenced.”

Among other things Brennan advocates is special innovative funding for certain therapeutic areas.

“That will allow less of the dancing around the table to get to the decision and the political decision. That’s the way drugs should be approved. The Joe Duffy arena is not where it happens,” he says, referring to the extensive lobbying and political campaign to get approval this year for Spinraza, a drug used to treat spinal muscular atrophy, a rare neuromuscular disorder that generally affects children and is often fatal, for which there were no other treatments.

“That’s why the structure is not right today because Spinraza [which is not an MSD drug] is an orphan drug [tackling rare diseases]. It’s an expensive medicine for a very specialised area but the value it gives to that patient is enormous. But it’s a small pool of patients and there is a huge cost benefit.”

As the drug companies and the Government start negotiations on a new medicines pricing agreement, Brennan says companies would be prepared to release some further funding in prices for older products but only if it allowed for funding for innovative medicines like those coming through the MSD pipeline.

“We got that promise in the last agreement. It didn’t happen.”

Lives: Originally from Newport in Tipperary, he now lives in south Dublin

Interests: With his background in Tipp, he is a big hurling fan, but also enjoys rugby and Formula One. He’s also a hiking enthusiast, quipping it “keeps the weight under control”

Something you might expect: As a senior executive with one of the top pharma companies, he is active in industry body, the Irish Pharmaceutical Healthcare Association, where he is deputy vice-president

Something that might surprise: He worked in nursing before he broke into pharmaceuticals as a sales rep.