Uniphar: ‘We’re probably the only IPO in Ireland this year’ 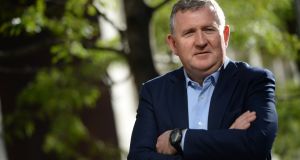 The world may be awash with cash but in Ger Rabbette’s experience that doesn’t make it any easier for companies looking to get hold of some of it.

Rabbette has spent much of 2019 bringing the medical supplies distribution business Uniphar to the stock market, floating in July on the junior markets in London and Dublin just ahead of a market wobble.

“It’s hard to believe it’s that tough to be honest because, really, the world is awash with cash,” he says. “[But] you go to the markets to try and get investment for what we would see as a very good investment case, and it was very tough.”

Stirring investor interest in London, in particular, he found very difficult, a fact he puts down to the paralysis that has become a feature of the City riven by uncertainty over Brexit.

“So, I think it’s gruelling but we really enjoyed it as a team,” he says. “Probably the only negative [is that] it takes a lot of time, management time. You have to make sure that the business is still being well run when you’re away from it for long periods, you know.”

In the end, Uniphar raised €139.4 million in net proceeds from the IPO, short of the €150 million target. That was largely down to the decision of Davy not to exercise its full rights to the €15 million over-allotment of shares. As stabilisation manager its role was to support the share – either by purchasing shares in the market post-IPO to stop or limit a fall in the market price or sell more shares into the market from the over-allotment to meet demand. In the event, there was no real market demand for the full allotment it held.

Rabbette concedes that he was very lucky to get the IPO away at all. “We’re probably the only IPO in Ireland this year,” he says. The company got to market just ahead of nervousness about the prospects for economic growth globally, not least in the face of trade wars, that has undermined stock markets since mid-summer. “A week or two later and we wouldn’t have got it away,” he says. “I think it was that tight.”

Was he disappointed that the flotation fell short of its target?

“What we have today is a very strong business – two very strong growth engines in product access and commercial and clinical, which generate a lot of cash and a supply chain business that is a very tough business for us. The new businesses are highly cash generative and we are fully invested, so €140 million is more than enough firepower for us to go out and do what we wanted to do.”

Uniphar had been talking about floating as far back as 2013 when it acquired Cahill May Roberts (CMH), a rival in the Irish pharma distribution sector.

“We raised equity to do the CMH deal and, as part of that we said we would double our revenue, which at that point, was €12 million to €24 million and that when we did that we would seek to IPO it.

“The positive is we have done better than we thought. We got great support from the banks so we didn’t need to go to the market.

“But now, we are saying that we’re at Ebitda [earnings before interest, tax, depreciation and amortisation] of €47 million and we want to double that again, so it was the right time to go to the markets.”

Not that Rabbette hasn’t been busy without the distraction of a marketing campaign to float the business.

Teetering on the brink

Brought in back in 2010 as Uniphar was teetering on the brink following the financial crash, he has overseen the fundamental restructuring of the business. First came the pain, with 500 of the company’s 800 staff let go as it battled to come to terms with its debt and an ill-judged investment in retail pharmacies.

But from that core of 300 people, the company has since grown through a series of acquisitions – eight in all since 2012 – at a cost of €180 million and counting. It now employs around 2,000 people.

And Uniphar is now a very different business. The old domestic operation – which manages wholesale supply of drugs to pharmacies across Ireland, including 235 that the company owns or has franchised under the Allcare and Life brands – is now but one of three divisions.

It’s a high volume segment, accounting for €650 million of the group’s current turnover of €800 million in the first half of the year, but the margins are tight – at around 1 per cent. For Uniphar, future growth depends on the other two parts of the group. These are commercial and clinical, which manages sales, marketing and distribution for pharmaceutical and medtech companies, and product access, where the focus is on high cost speciality pharma – drugs tackling rare conditions – and supplying unlicensed medicines.

Product access is a global business, recently boosted by the acquisition of Durbin, a long-established player, in a €30 million deal that could yet cost close to double that with earnouts.

Funding acquisitions like Durbin was one of the main reasons for floating the business and the deal was the first call on the €139 million IPO “firepower”. It’s a deal that excites Rabbette, one that he sees as the group’s biggest opportunity.

“Durbin gives us an ability to become a global player in a very high growth market. If you were to forecast out to 2023, 50 per cent of the value of the pharma market is going to be in speciality and orphan drugs but only 1 per cent of the volume,” he says.

“We’re seeing areas now where the market is fundamentally changing. And what Durbin has done over the last 40 odd years is build a really strong specialism in this space.”

Product access may be the future but much of Uniphar’s recent focus has been on commercial and clinical, the contract sales business, where the Irish company is aggressively pursuing a pan-European footprint. Having entered Britain in 2015 and the Benelux countries in 2018, next up is a move into Scandinavia, including the Baltic states, which Rabbette says confidently will happen before the end of the year.

Then the company is turning its attention back to mainland Europe, with a stated intention to target France, Germany, Poland, Austria and Switzerland.

“We have some acquisitions we are looking at,” says Rabbette, “but they are not at an advanced stage. So we’re still hopeful in the medium term in northern and southern Europe.” And what’s medium-term? “Two to three years.”

Given that the European contract sales market is fragmented and is forecast to grow by 43 per cent between now and 2022, it’s easy to see why Rabbette is determined not to slow down the pace of expansion.

Revenue in contract sales has more than quadrupled in the past year alone, from just under €21.7 million in the first half of last year to €98 million in the same period of 2019.

For the group as a whole, the commitment to shareholders is to double Ebitda over the five years to the end of 2023. As it stands, Uniphar has ties to seven of the top 10 pharma companies and six of the top 10 players in medical devices. With the assimilation of Durbin, it ships medical supplies to more than 160 countries.

Not everything is rosy, however. Looming on the horizon is Brexit.

“Brexit is a hard one for our business because, ultimately, it’s going to drive up healthcare inflation which, in the long term, is bad news,” Rabbette says.

On supply chain, as with so many big companies, Uniphar has invested serious time and energy in organising new routings for product that would traditionally pass through the UK landbridge. On that basis, it hopes to escape the worst effects of Britain leaving the EU unless, as Rabbette puts it, it becomes a “really messy divorce”.

“Then who knows what will happen. It’s a real worry for the UK from a disruption perspective, you know. You’d hope it won’t go there.”

But it’s not all bad. On the ground in the UK, Uniphar sees itself as a disruptor, with a strong digital platform. “It could be an opportunity for us in the UK to gain new business because the big manufacturers won’t invest, they’ll outsource more and more of their activity,” he says.

Pressure on prices for medicines – in Ireland and further afield – is another concern. A further squeeze would, Rabbette says, destroy the profitability of the older Irish supply chain business. That is why the company is concentrating on growing the higher end of the business.

“That’s where we can see the future. They are less price sensitive than your typical aspirin but, still, price is everything. We have to be efficient on how we do it to be economic.”

Rabbette is a numbers man at heart. An accountant, he trained with EY after a BComm degree at NUIG before jumping into industry with Cahill May Roberts – a company that, ironically, he later bought after joining Uniphar.

“I wanted to get into a business which is real, where you can do something or do some good which healthcare is,” he says. “And basically, I just probably got lucky to get into a nice space, a high growth space.”

Now that he’s fronting a public company, is this self-declared “low profile guy” at all concerned about the pressures of delivering for investors looking anxiously at a share price that has only rallied to recover the €1.15 level at which it floated in the wake of positive maiden results this week.

“I can only work on and do what’s right to grow the business. I worry about growing the business and doing the right thing, I can’t influence the capital markets, I’m afraid. We have to work hard to communicate our story, so that people understand it. I don’t worry about the share price. But certainly, it will be my first and last IPO.”

Family: Married with one son and two daughters, he is from Mayo but lives in Dublin.

Something you might expect: “I’m a complete business head, so all I do is read business books and business magazines. The Financial Times and that sort of thing. The kids are always slagging me that I’m very one-dimensional .”

Something that might surprise: He’s a keen cyclist and has taken part in the Rugby Legends cycle for the Cross cancer charity.