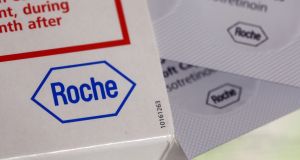 China has gone from Roche’s 10th biggest market to its second-largest behind the United States in a decade. Photograph: Chris Ratcliffe/Bloomberg

Swiss drugmaker Roche lifted its 2019 sales target on Wednesday for the third time this year, helped by newer medicines and as China bought more cancer drugs to treat a disease blamed for a quarter of the nation’s annual deaths.

Roche’s full-year revenue is now seen growing at a high-single-digit percentage rate, the Basel-based company said, to what would easily top $60 billion (€54.20bn). That is up from the July’s mid- to high-single digit growth estimate.

The new forecast sets a high bar for Swiss rival Novartis, which reports results next week.

Over a decade, China has gone from Roche’s 10th biggest market to its second-largest behind the United States, with 4.5 billion Swiss francs (€4.1 billion) in 2018 sales.

The trend has accelerated, with growth in China topping 50 per cent over the first nine months, about double 2018’s rate.

Cancer has been on the rise in China, driven by air pollution and high rates of smoking. Water pollution and excessive use of chemical fertilisers and pesticides have also been blamed for an increase in rural cancer rates.

Roche, the world’s biggest cancer drug maker, is profiting as China approves more products from western pharmaceuticals makers, including the Swiss company’s Rituxan/Mabthera, Herceptin and Avastin, and as the nation expands treatment beyond urban centres.

“We’re benefiting from the fact that we have a major geographic expansion of both Herceptin and Mabthera, especially into rural areas,” Roche drugs division head Bill Anderson said, adding rapid Chinese sales growth this year was likely a “high-water mark”.

“We’ve got our new medicines launching in China at an increasing pace, so we look forward to continued strong growth,” Anderson said. “But greater than 50 per cent is hard to achieve in an ongoing fashion.”

Biosimilar copies of Roche’s patent-expired Rituxan and Herceptin have taken their toll in Europe and are just now arriving in the US.

Still, chief executive Severin Schwan has pledged to more than offset that erosion with newer medicines including multiple sclerosis drug Ocrevus, haemophilia A treatment Hemlibra and lung cancer drug Alecensa, all of which saw sales rise steeply over the first nine months of 2019.

“The long-feared skid marks caused by biosimilars in the US market are not visible,” said Zuercher Kantonalbank’s Michael Nawrath, who raised his rating to “overweight” from “market weight” on Wednesday. – Reuters

1 House asking prices rebound but will likely fall again - MyHome
2 Plans for €2bn Dart expansion lure Bombardier to Dublin
3 Ireland has among highest rates of home-working during Covid
4 TV guide: Pros and cons of broadcast television options
5 There may be trouble ahead for the housing market
6 Irish food trade could slide by one-third if EU and UK fail to cut deal
7 Google tells workers to return to country where they are employed
8 AIB launches €300m social housing fund
9 Commercial landlords urged to make ‘concessions’ to struggling businesses
10 Subway bread too sweet for the Irish tax authorities
Real news has value SUBSCRIBE