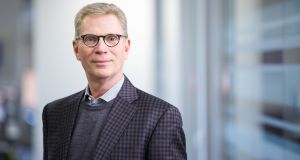 BioMarin, a drug group that focuses on treating patients with rare genetic disorders, many of them affecting children, opens a new Dublin headquarters for the EMEA region on Wednesday in a move that doubles the numbers employed.

The expansion comes as the pharmaceuticals group continues work on a €38 million expansion of its plant at Shanbally in Cork – the company’s only manufacturing plant outside of the United States.

Tánaiste Simon Coveney welcomed BioMarin’s “recognition that Ireland is an ideal location for a business with a global reach”.

BioMarin, which first came to Ireland 2011, now employs 500 people here – 20 per cent of its global workforce. The completion of the Shanbally expansion will see another 50 jobs created at the company’s Irish operations.

Jim Lennertz, the company’s senior vice-president for commercial operations in EU, the Middle East and Africa, who runs the Dublin business, said Ireland was a major location for BioMarin.

“BioMarin is investing in our future operations in Ireland to support rising demand for our rare disease therapies,” he said.

He said the company was benefiting from the “exceptional pool of life sciences talent and expertise in Ireland, which means we can recruit the right people at a time when the company has a number of exciting innovations in the pipeline and continues to drive strong growth in the region”.

BioMarin has built a business focusing on ultra-rare genetic medical conditions. Many of these, such as Batten’s disease, affect young children and are fatal. Given the small patient populations, many have few or no treatment options.

“We produce the enzymes that are the treatment for these patients,” said Mr Lennertz, who acknowledges that while current medical science can deliver treatments, these are not cures.

“We will manufacture the missing enzyme and will replace it. That can halt the progression of the disease but you can’t really reverse damage that has already been done.”

BioMarin aims to deliver either a first treatment for such conditions or one that significantly improves on existing therapies, providing “meaningful advances to patients who live with serious and life-threatening” diseases.

Some of the conditions targeted by BioMarin’s seven products have as few as 1,000 patients worldwide and one of its drugs is not sold in Ireland simply because there is not a single patient in this market.

The company is now moving into new markets with larger, though still niche, patient numbers and is currently working on therapies for severe haemophilia and achondroplasia, a form of dwarfism.

“Rare diseases have a very high level of unmet need, with 95 per cent of rare diseases lacking even a single treatment option,” Mr Lennertz said.