Martin will juggle his time between Malin and Novan 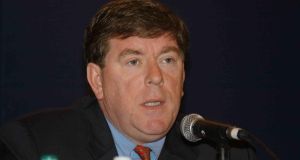 Kelly Martin has taken over as interim chief executive of US group Novan. He will juggle his time with his existing role as CEO of Malin Corporation. Photograph: Joe St Leger

Kelly Martin, the chief executive of Dublin-headquartered life sciences group Malin Corporation, has been appointed as interim chief executive of dermatological products company, Novan, in which Malin is an investor. This will result in him juggling his time between the two roles.

Malin and the US company Novan separately announced the news on Monday. Mr Martin, who was previously chief executive of Athlone-based drugs group Elan, was until recently a non-executive director of Novan, which is testing nitric oxide for use as an anti-inflammatory and anti-fungal medicine.

Malin, which has a market cap of €530 million on the secondary ESM market in Dublin, said Mr Kelly’s appointment at Novan would help it “to extend the business runway and broaden the therapeutic application” of its potential products.

Malin has a portfolio of about 18 separate investments, including Novan, in which it bought a stake of about 16 per cent last year.