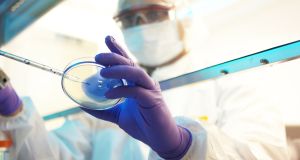 Out of Almac’s global workforce, 2,650 of its staff are based at its facilities in Craigavon. Photograph: iStock

Alan Armstrong, the group’s chief executive said 2016 was a “very successful year” for the privately owned organisation that was established by the late Allen McClay in 2002.

In its latest annual report Almac highlights that its pretax profits in 2015 included a $20 million (€17.8 million) payment from out-licensing oncology products and diagnostics tests developed in-house by Almac Diagnostics.

Mr Armstrong said: “We continued to deliver upon our global expansion strategy including investment of around £31 million in new facilities, equipment and resources.

“All our profits are reinvested into the business enabling us to offer best-in-class services and products to our clients.”

Its latest financial report shows the Northern Ireland group enjoyed a 14 per cent jump in its global revenues to £447 million during 2016 and a 12 per cent increase in total employee numbers which grew to 3,975.

Out of its global workforce 2,650 of its staff are based at its facilities in Craigavon, where it recruited an additional 421 people last year.

The company recently confirmed that it plans to invest a further £5 million investment at its Craigavon campus to develop more lab and office facilities.

The Northern Ireland group’s latest annual report also shows it has continued to invest heavily at its US headquarters, located in Souderton, Pennsylvania and at other facilities in Asia and Ireland.

Earlier this year Almac confirmed that it had acquired a facility in Dundalk at the IDA Business Park as a “safety net” to safeguard against any fall out from Brexit and to give it easy access to the EU single market.

Almac has said in its 2016 annual report that “further investment is being planned” as part of its global expansion strategy.

Donohoe promises no ‘cliff-edges’ in removal of Covid supports