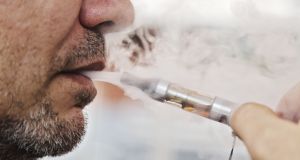 The e-cigarette was supposed to be the future of tobacco - an innovation marketed as “reduced risk” that could offer a growth story to an industry whose core product is both deadly to its customers and in long-term decline.

Six deaths, a mysterious outbreak of pulmonary illness and an intervention by Donald Trump have abruptly challenged that assumption - and thrown into doubt a potential $200billion (€180.4 billion) tobacco merger, premised in part on vaping’s continued popularity in the US.

In a matter of weeks, doctors in 33 US states have connected at least 450 cases of lung disease to e-cigarette use. After some of those patients died, the Centers for Disease Control and Prevention issued a blunt warning: until they knew more about the causes, the public should consider avoiding e-cigarettes altogether.

The threat to the industry escalated on Wednesday when president Trump announced that his administration was looking into a complete ban of flavoured e-cigarettes. Alex Azar, his health secretary, blamed them for a vaping “surge” among American school children.

“An entire generation of children risk becoming addicted to nicotine,” he said, pointing to new data suggesting that more than a quarter of high school students had vaped in the past month - up from 20 per cent a year earlier, when regulators first warned about an underage “epidemic”.

What happens next will determine the fate of a $4.5 billion industry category that Wells Fargo estimated had grown from 2 per cent of the US nicotine market to 7 per cent in the four years to this July.

Despite decades of investment in e-cigarettes from traditional tobacco makers, nearly all of that growth came from one newcomer to the industry, Juul.

Forecasts that e-cigarettes could keep producing compound annual growth rates of 15-20 per cent convinced Altria, the US maker of Marlboro cigarettes, to spend $13 billion last year for a 35 per cent stake in the San Francisco start-up. Altria vowed to use its marketing power to supercharge a brand that had claimed more than 70 per cent of the US vaping market.

In turn, it caught the eye of Philip Morris International, which controls the Marlboro brand overseas. Last month, it emerged that the Lausanne-based group was in talks with Altria about a nil-premium merger that would reshape the global tobacco industry.

The deal remains under discussion, according to people briefed on the talks, but the politicisation of the debate around e-cigarettes “doesn’t help”, one said. The path to a deal for which investors have shown little enthusiasm “gets steeper.”

Juul’s value “has to be lower due to the mounting pressure, both legal and regulatory” said Chris Growe, analyst at Stifel, who called Mr Trump’s warning “the ultimate threat to vaping”.

Tighter regulation would also be a headache for other tobacco companies with e-cigarette interests, including London-listed British American Tobacco and Imperial Brands. Like Altria and PMI, they have also been investing heavily in alternatives to traditional cigarettes as consumers switch at an accelerating rate. BAT plans to cut 2,300 jobs, saying it would direct the savings towards new products.

Yet even before the White House’s intervention, US regulators had been planning e-cigarette curbs.

Anticipating a crackdown, Juul had pulled flavoured versions such as mango and cucumber from shops although the company - known for its trendy devices shaped like USB sticks - still sells other flavours online.

Mr Trump said his administration would “double and triple up” on the planned restrictions, extending the ban to all flavours other than tobacco, including the popular mint and menthol varieties.

Juul said it supported “aggressive” action on flavoured e-cigarettes but many in the industry reacted with alarm.

Gregory Conley, president of the American Vaping Association, said vaping had helped wean millions of Americans off cigarettes and warned such a sweeping crackdown could create “another multibillion-dollar black market”.

“Prohibition has never worked,” he said.

Not everyone is convinced the plans from the White House will materialise. “This could end up just being a tough speech,” said Mr Conley. The FDA, for its part, had been “filled with big talk and little action so far”, Mr Growe added.

Joelle Lester of the Public Health Law Center said the presidential intervention had “the potential to be a significant turning point, but public statements of concern aren’t the same as meaningful action on public health”.

The industry had lobbied successfully in the US to avoid the constraints it has been subject to elsewhere. UBS analysts in May dubbed the US “the least regulated vapour market in the world”. Recent headlines about fatal illnesses have soured attitudes in Washington, however.

The science behind the outbreak remains mysterious. It shows up on scans like pneumonia but patients do not have an infection: something vapers are inhaling may be causing their lungs’ immune system to react.

Because many of those who have fallen ill have been vaping cartridges containing THC - the chemical extracted from cannabis - one theory is that their lungs are being inflamed by the vitamin E oil used to dilute the THC.

But Robert Tarran, a professor at the University of North Carolina’s Marsico Lung Institute, said that may be correlation, rather than causation, especially because the medical profession lacks a full record of who might have been affected.

“The answer is we don’t know what is causing this right now,” he said.

Prof Tarran is part of a working group of scientists trying to discover the cause of the disease, having studied e-cigarettes for five years. They need to study a large sample of vapers, whether or not they have the condition, to understand if the disease could be caused only by a particular chemical in some cartridges, or whether it only shows up in certain people, like the smoking-related chronic obstructive pulmonary diseases (COPD), which only affects about a third of smokers.

One challenge, he said, is that the FDA does not make vaping manufacturers list their ingredients. The industry sells thousands of different flavours, all with slightly different formulas.

“We have to reverse engineer when we are trying to figure out what it is and its potential toxic effects,” he said, adding that studying THC in particular was difficult because it is illegal.

Regulators are also split on how much faith to place in the hypothesis that the disease is only linked to illegal THC cartridges. In the US, the FDA has warned vapers that it would be “prudent” to avoid THC products or any vaping products sold “on the street”. In the UK, Public Health England said most cases were linked to the illicit vaping liquid that is more “tightly regulated for quality and safety” in the UK than in the US.

Anti-tobacco campaigners have leapt on the suddenly elevated public concern about vaping. Michael Bloomberg, the former New York mayor, is putting $160 million behind efforts by cities and states to ban flavoured e-cigarettes after similar laws passed in Michigan and San Francisco. Ms Lester said she was “cautiously optimistic” that federal regulation would follow.

Whether or not the Trump administration’s plans become law, the intensified political and scientific scrutiny of vaping could itself be enough to weigh on sales.

Regulators are under pressure to respond now, even as Prof Tarran and his fellow scientists race to finish their investigation. “We want to get to the bottom of a very unusual situation,” Mr Trump said: “It’s so new, and it’s become so big, so fast.” – Copyright The Financial Times Limited 2019