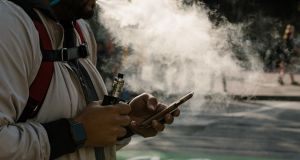 US public-health agencies have reported a number of serious illnesses believed to be tied to vaping, including a death in Illinois. Photograph: Jason Henry/The New York Times

The governor of the US state of Michigan said she would outlaw the sale of flavoured e-cigarettes in her state, part of a national US crackdown on vaping amid a recent spike in illnesses tied to the products.

Gretchen Whitmer, who would become the US’s first governor to issue such a ban, said the decision came in response to increased e-cigarette use among teenagers and marketing that she said targeted youths. Dr Joneigh Khaldun, the state’s chief medical executive, called youth vaping a public-health crisis.

“Companies selling vaping products are using candy flavours to hook children on nicotine and misleading claims to promote the belief that these products are safe,” Ms Whitmer, a Democrat, said in a statement. “That ends today.” The move in Michigan is part of a wave of growing pressure from politicians around the US for more regulation of e-cigarettes and their use by teenagers. Several state attorneys general have called for the federal government to ban flavoured e-cigarettes.

In recent weeks, US public-health agencies have reported a number of serious illnesses believed to be tied to vaping, including a death in Illinois, raising questions about the products’ safety at any age. In Michigan, Ms Whitmer’s order would ban the sale of flavoured nicotine vaping products in stores and online. She also instructed state health officials to stop any marketing of the products that uses terms such as “clean”, “safe”, or “healthy”. A spokeswoman for Ms Whitmer said the new rules would be put in place in the next few weeks, and that businesses would then have a month to comply.

Tony Abboud, executive director of the Vapor Technology Association, a US industry group, criticised the ban in a statement. He predicted that it would create a black market for flavoured e-cigarettes. A statement from Juul Labs, one of the leading e-cigarette companies, which operates in the Republic, said it favoured a ban on flavours “that mimic candies or children’s foods”, but believed menthol-flavoured e-cigarettes should be allowed. – New York Times service