Gordon Dunne, who was appointed in 2015, will officially leave his position at the end of August 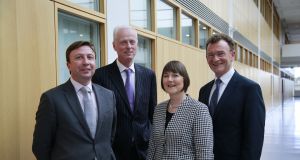 Gordon Dunne, far left, has already stepped away from his duties at the Mater hospital in Dublin. An interim chief executive, Alan Sharp, has been appointed. File photograph: Nick Bradshaw

The chief executive of the Mater hospital in Dublin, which is among the busiest public hospitals in the State, is leaving to work for businessman Larry Goodman.

Gordon Dunne, who was appointed to the top role at the Mater in 2015, will officially leave his position at the end of August, the hospital and the State body, Ireland East Hospital Group, both confirmed.

Mr Dunne has already stepped away from his duties, however, and an interim chief executive, Alan Sharp, has been appointed. Mr Sharp was previously the Mater’s director of estates and facilities.

Mr Dunne could not be reached for comment about his plans and his work email automatically responds with a message to contact Mr Sharp’s email.

IEHG would not comment on Mr Dunne’s expected move to work as an adviser to Mr Goodman, who has extensive private hospital interests. The Mater said it was not in a position to contact its outgoing chief executive to confirm his plans.

A spokesman for Mr Goodman’s Parma Investments group, which holds much of the businessman’s private hospital interests, also declined to comment.

The Louth businessman owns major stakes in three private hospitals, the Galway Clinic, Blackrock Clinic in south Dublin and the Hermitage Clinic on the outskirts of west Dublin. He has fought legal battles at Galway and Blackrock over rows with other shareholders.

The Irish Times also recently revealed that Mr Goodman has agreed a deal to buy out the 31 per cent stake of his co-investor, Sean Mulryan, at the Hermitage, whose revenues last year were €74 million. Mr Goodman already owns 31 per cent of the business.

There is, however, a major boardroom dispute at the Hermitage involving the future of its chief executive, Eamonn Fitzgerald, whose lawyers last month wrote to the hospital claiming there was a plan to sack him.

Representatives of Mr Goodman subsequently wrote to the Hermitage confirming that Parma wanted to replace the chief executive, but denying that Mr Goodman had tried last October to acquire Mr Fitzgerald’s minority stake.

If Mr Goodman does eventually end up with majority control at all three private hospitals, industry sources have speculated that he may look to combine them as a group, subject to permission from competition regulators.

There are also rumours within the industry that he could eventually look to sell on his Irish private hospital interests to a foreign buyer, such as a US hospitals group.

Mr Dunne originally joined the Mater in early 2015 as chief operating officer, following a four-year stint as chief executive of Cappagh orthopaedic hospitals, where he had worked his way up through the ranks.

Several months after joining the Mater, he succeeded Mary Day as chief executive when she left to take over the IEHG.