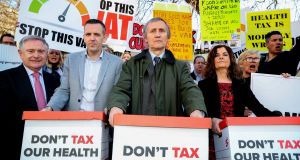 Food supplements will have to be taxed, the tax strategy group has found. The only issue is whether that should be at the standard rate of 23 per cent, or at lower 13.5 per cent and 9 per cent rates.

Applying different rates to different supplements in what Revenue estimates was a €60 million market in 2016, would be problematic, the expert group, which examines options for the Department of Finance ahead of the budget, found.

“There are significant concerns over maintaining separate rates for different food supplements,” the report found. As sports supplements and slimming aids are, in general, composed of the same ingredients as other supplements, “here is an inherent difficulty in distinguishing these products from other food supplement products”, it stated.

Food supplements have been zero rated since the early 1970s but, following an expert review, Revenue found there was no legal provision to allow retention of a zero rate.

VAT at 23 per cent was due to come in from March but that has been deferred to November to allow the Minister for Finance to examine options.

Supplements are taxed in all other EU jurisdictions, even those with a zero rate on food. Half apply their standard rate of VAT with the other half opting for a reduced rate.

A public consultation in Ireland over April and May received 121 submissions, most of them calling for the retention of the zero rate.

The tax strategy group confirmed that certain foods for specific groups, such as baby milk formula, as well as folic acid and other vitamins and minerals classified as medicines, and fortified foods, will not be affected by any change in the tax treatment for supplements.

1 Should my mam wait for house prices to drop before buying?
2 McCanns’ Balmoral sees property value hit from Covid-19
3 Irish whiskey sales near milestone of 12m cases a year
4 Pilita Clark: Why we’re about to learn if we are really in the A-team
5 ‘I have a talent for justifying purchases’
6 Chris Johns: Past is another country when it comes to our post-pandemic future
7 Hard-hit SMEs get ‘paltry’ €11m worth of loans under State scheme
8 ‘I’m so lucky to be in the Caribbean – a million miles from Derry Girls’
9 Citigroup warns that markets are out of step with reality
10 US ‘hard seltzer’ drink White Claw launches in Ireland
Real news has value SUBSCRIBE