Whether it’s a beef with farmers or at his hospitals, he remains the busiest of Irish billionaires 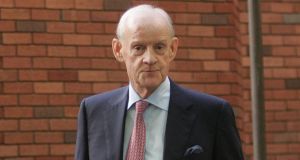 Larry Goodman: it is at his exploits in the healthcare industry, the trio of Irish private hospitals in which he is involved, where we have witnessed the full breadth of his approach to business. File photograph: Alan Betson

In reporting the affairs of media-shy Irish billionaires, those of Dermot Desmond and, in particular, Denis O’Brien garner most attention. They are the box office pair.

Between the myriad issues that confront Desmond at troubled Datalex and O’Brien at debt-addled Digicel, not to mention the recent maelstrom at Independent News and Media that occupied them both, there has been no shortage of material in recent times.

The Irish billionaire who these days has the most overflowing in-tray, however, surely must be Louth man Larry Goodman. Next month he turns 82 years of age. But this appears to be no barrier to his tendency – whether he likes it or not – to become embroiled in several of the biggest business news stories of the day, all at once.

Just look at the long-and-getting-longer list of his business interests and other ongoing issues with which he is dealing, or has recently dispatched. Goodman has not been in the press this much since the dark days of the 2013 horsemeat scandal that afflicted the meat processing industry, including his ABP group.

The comforts of a near €2.5 billion fortune surely ease the pressure. But it is still exhausting thinking about it, as the beef baron now has more irons in the fire than the busiest of blacksmiths.

Currently, Goodman appears to have a thing for listed businesses. He has spent months positioning himself to profit from the expected sale of listed property company Green Reit, building up a more than 5 per cent stake at carefully weighted prices. This is like a game of corporate chess. The trick is to make the right moves at the right time. He was also the only Irish billionaire to make a bean out of INM, turning a 35 per cent profit last month on his €3.1 million stake, while Desmond barely washed his face and O’Brien lost at least €500 million.

Back in-house, his ABP meat-processing empire, which has been busy in recent times trying to crack China, is caught up in ongoing beef protests and industry disputes with farmers. And when it solves that issue, there is another little nut left to crack: how does ABP, whose operations straddle Ireland and the UK, as well as continental Europe, cope with a disorderly Brexit? Agrifood is most exposed.

This may be more of a distraction than a real issue, but Goodman has also regularly had to field queries in recent times about the Lichtenstein and Luxembourg-centric tax management gymnastics of his business empire. That sort of thing is bread and butter for Irish billionaires. They can do it in their sleep. But headlines this summer revealing that nine of his businesses reported profits in Luxembourg last year of €170 million, while paying little tax, came at a bad time for Goodman PR-wise, given the trouble that there is now up at the mill with Irish farmers.

Goodman has also been extremely active in the property market in recent times, with several high-profile redevelopments under way in Dublin city centre.

But it is at his exploits in the healthcare industry, the trio of Irish private hospitals in which he is involved – Galway Clinic, Blackrock Clinic and Hermitage Clinic in Dublin – where we have witnessed the full breadth of his approach to business. We have seen his vision, measure and mettle, and occasionally his ruthlessness.

Goodman has been involved in bitter shareholder disputes at both Blackrock and Galway in recent years, which have occupied the courts at length. We are closer to the end of those various stories than the beginning, and Goodman is in a good position at both businesses.

More recently, however, he has also become embroiled in a boardroom row at the Hermitage involving its long-serving chief executive, Eamonn Fitzgerald. This fight has the potential to make it a hat-trick of court cases involving Goodman and his hospital interests, with Fitzgerald threatening to sue his employer and Goodman urging it to hold firm.

It appears that Goodman, who owns 31 per cent, has struck a deal with developer Sean Mulryan, who also owns 31 per cent, to buy out the latter’s stake in Hermitage. The deal to give Goodman majority control has yet to be consummated, however, as it must first comply with the terms of an existing agreement between all shareholders.

In the meantime, board correspondence appears to confirm that Goodman wants to force the chief executive out. Fitzgerald claims this situation arose after he refused to sell Goodman his 5 per cent stake in Hermitage, which Goodman denies.

Legal correspondence is ongoing between all parties. It has the potential to get messy.

If Goodman eventually does end up in control of all three hospitals, what might he do with them? He could try to run them as a group, if that can be done within the constraints of competition law.

But there is also the intriguing possibility that the assets together could be attractive to a buyer, with whispers of the interest of a US private healthcare group. Either way, Goodman still has plenty more moves to make.

- For Dermot Desmond, will diamonds be forever? The businessman has been manoeuvring in the sector in Canada for about two decades now, with no sign of major paydirt so far. With the share price on the floor at Toronto-listed Mountain Province Diamonds, where Desmond is the largest shareholder, the renowned dealmaker may soon have to live up to his moniker, and make a deal happen.

Still, other shareholders are restless. The share price has had a precipitous fall from its 2016 peak of about 7.15 Canadian dollars to its current level of 1.24, although it did raise substantial capital in the meantime.

The industry is under pressure from changing consumer perceptions of the product and the encroachment of synthetic diamonds. Still, MPD should be worth far more than its current share price would suggest. Somebody could easily turn a buck if they were to accept a risk and take it private? Might there yet be a twinkle in Desmond’s eye?