US cannabis grower aims for high growth from Dublin HQ 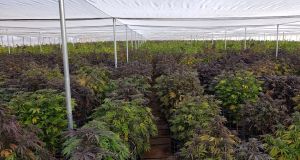 The Dublin-based subsidiary will be called MJ International Research Company

A Nasdaq-listed cannabis grower plans to establish an Irish subsidiary early next year as it looks to gain a foothold in the European medical marijuana market.

Las Vegas-headquartered MJ Holdings has said it will locate its European headquarters in Dublin ahead of its launch in mainland Europe.

The company initially intends to cultivate 10 acres of medical marijuana for export to a number of European countries, but does not state where it will grow the product.

Destination markets include Germany, Poland and Greece, which have all legalised cannabis for medical use over the last two years.

The Dublin-based subsidiary will be called MJ International Research Company Limited, its parent said in an update to shareholders.

MJ Holdings is headquartered in Nevada, a state that has has “pot-friendly” policies and has become almost synonymous with marijuana since it legalised the drug for recreational purposes.

The company provides management and consulting services within the legalised cannabis industry to regulated players, with a number of related subsidiaries also offering cultivation and production services.

Its operations include a three-acre outdoor marijuana cultivation facility in the Amargosa Valley and a 17,000sq ft agri-tourism destination called the Highland Show-Grow in Las Vegas.

Last month the business launched a new brand of marijuana products under the Highland Brothers brand name. It is also in the process of commencing industrial hemp operations to take advantage of the continually growing demand for cannabidiol (CBD) isolate in the US. This is an all-natural supplement made from hemp oil that is legal in 30 states.

10 Digital fitness comes into its own with breathtaking possibilities