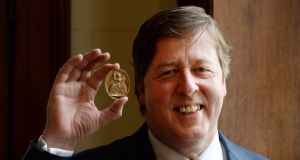 Ciarán Murray, the chairman and former chief executive of clinical research company Icon, was awarded with the RDS gold medal for enterprise on Friday for his “outstanding professional and leadership skills”.

“Icon plc is a global Irish success story that should be recognised and celebrated as one of our major indigenous success stories,” said RDS president Bernie Brennan.

“Today, with the awarding of the 2018 RDS gold medal for enterprise, we celebrate the career and achievements of the chairman of Icon, Ciarán Murray, as an outstanding individual in the Irish bio-pharma-medical sector.

“In Ciarán, we have found someone who in many respects embodies the RDS mission, having demonstrated a commitment to innovation and investment in talent throughout his career.”

After accepting the award Mr Murray spoke of the change at Icon since he took over as chief executive from the chief financial officer role.

“Getting your hands on the control of power is tremendously refreshing,” he quipped, adding that while the role was rewarding, certain sacrifices had to be made.

During a question and answer session he explained how the pharmaceutical industry has changed, to the benefit of his business. When he started, 25 per cent of clinical trial work was outside. That has now grown to over 50 per cent, he said.

Speaking on the company’s Irish presence, he said that identity was very important to Icon and explained the country is attractive for a variety of reasons.

“[Tax] is no longer why companies are here...we have a good global view of the world [in Ireland],” he said. Although he suggested the country was “chronically underinvesting in education”, and that housing remained an issue for business planning to invest here.

Mr Murray, who previously worked for PwC, Kraft Foods, Novell, Northern Foods and Codec systems, grew turnover dramatically during his time with Icon and increased earnings per share by 60 per cent in his first three years.