Cantillon: No mention of investigation into implants at 12-minute meeting attended by 20 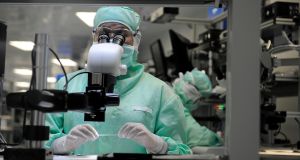 The Implant Files, the latest project from the International Consortium of Investigative Journalists (ICIJ), cast a worried look not just at the regulation of the sector but at the record of Medtronic plc. Photograph: Munshi Ahmed/Bloomberg

The AGM of the world’s largest medical device manufacturer took place in Dublin on Friday, 12 days after the Implant Files, the latest project from the International Consortium of Investigative Journalists (ICIJ), cast a worried look not just at the regulation of the sector but at the record of Medtronic plc.

About 20 people gathered in a first-floor room of the Shelbourne Hotel just before 8am and sat looking out onto St Stephen’s Green, waiting for the chairman and chief executive, Omar Ishrak, to open proceedings.

He was joined at the top table by company secretary Brad Lerman. Given that there were 10 members of the board sitting in the room facing the table, along with a representative from auditor PwC, as well as public relations and other Medtronic executives and employees, it can be said with certainty that the number of ordinary shareholders was in the low, and probably very low, single digits.

Ishrak opened the meeting just after 8am, and informed the room that the meeting would deal with the reappointment of directors and of the auditors, as well as the acceptance of the Irish-rules financial statement for 2018. He asked for any questions, of which there were none, and then announced that the already cast votes had approved the three items on the agenda. The meeting was over by 8.12am, and the directors adjourned to another room for a board meeting.

A request from The Irish Times that Ishrak might take a question or two about the ICIJ project before or after the agm was not acceded to. In a response issued in the wake of the ICIJ project, the company rejected any implied attack on its business ethics.

“Every day, we strive to meet and exceed our high standards of excellence in pursuit of our mission to alleviate pain, restore health and extend life,” it said in a statement.

The corporation, which transferred its domicile to the Republic a few years ago in a controversial, tax-driven inversion move, still has its operational headquarters in Minneapolis. It also has a very substantial operational presence in Ireland, and is a major employer. But the corporation’s size in the Irish economy was certainly not reflected in the size of its agm.