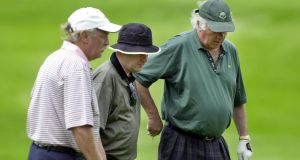 The London-headquartered group operates more than 200 care homes and seven registered hospitals. It was put up for sale earlier this year by its owners, who also include Derrick Smith, part owner of the Coolmore Stud racehorse breeding business in Co Tipperary with John Magnier, with a price tag of £2.5 billion (€2.8 billion).

Barchester, which is being marketed by US banking giant JP Morgan for the businessmen, is also being circled by another US healthcare-based real-estate group, Ventas, and Seattle-based property investment firm Colombia Pacific Advisors, according to online mergers and acquisitions publication Betaville.

The Irish tycoons first invested in Barchester 24 years ago, a little over a year after it was set up by British entrepreneur Mike Parsons. The company had an average of 15,462 staff last year and provided more than 12,000 beds across the UK.

A spokesman for the group declined to comment on the sale process.

Welltower, previously known as Health Care Reit, and Ventas were reported in May 2013 to have been circling Barchester as the group was looking to refinance its debt. The company went on to repay about £900 million four months later, just weeks before the debt was due to mature, after selling properties to a group of investors and leasing them back.

Barchester’s earnings before interest, tax, depreciation, amortisation and rent increased by almost 7 per cent last year to £174 million, as turnover rose nearly 5 per cent to £591 million.

Elsewhere in the sector, the UK’s biggest care homes operator, Four Seasons, may find itself ultimately on the market as it works on a restructuring plan with H/2 Capital Partners, a US hedge fund that controls much of its £500 million debt mountain.

Four Seasons, which provides care to 17,000 people, is currently benefitting from a forbearance period running to December 10th, though that may be extended.

8 Donohoe promises no ‘cliff-edges’ in removal of Covid supports