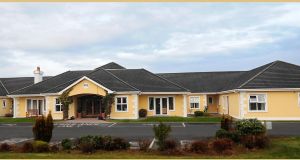 Brindley Healthcare, controlled by Donegal businesswoman Amanda Torrens, has agreed a deal to buy a nursing home in Laois, as part of an ambitious expansion plan backed with €25 million funding.

Brindley has bought the Kilminchy Lodge facility near Portlaoise, which can accommodate up to 52 residents and employs about 77 staff. The facility was sold by a local consortium .

The deal means Brindley now operates eight residential nursing homes, which the company says places in it among the largest privately operated nursing groups in the State.

The company has traditionally been focused on Ms Torrens’s northeastern bailiwick, but in recent years it has branched out elsewhere in the State. In June, Brindley acquired its first nursing home in the east of the country, when it bought Ashley Lodge in Kildare.

The group embarked upon its acquisitions spree after it secured a €25 million facility from Ulster Bank. Ms Torrens said it plans to buy “at least” 10 more nursing homes. Brindley’s aim is to go from 400 nursing home beds to 1,000 over the next two years.

The company says it will expand by 200 beds through acquisitions in the pipeline for the coming year.

Ms Torrens founded the Brindley group in 2000. It was previously ultimately controlled by an offshore entity in the British Virgin Islands.

Documents filed in the Companies Registration Office show that, last December, ultimate control of Brindley Healthcare was shifted to another company, which is owned by an entity from Jersey.

The Raphoe businesswoman welcomed “the support of Ulster Bank” and said the Portlaoise acquisition was “the next step” in Brindley’s growth plan.

Her other interests in the healthcare industry includes Pontemed Ireland, which operates a clinic for patients requiring treatment for deep tissue complaints.