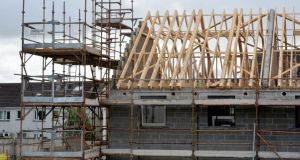 DRes has control of a landbank capable of delivering more than 6,400 houses and apartments.

US private equity giant Lone Star’s plans for the €300 million-plus initial public offering (IPO) of an Irish housebuilding firm have been put on hold until next year, following a “red October” sell-off of equities globally last month, according to market sources.

The company, called DRes, set up in partnership with Durkan Residential’s managing director, Patrick Durkan, is said to have received positive feedback from potential investors on its plans as new home supply falls well short of demand in Ireland.

However, a rally by stocks globally in the past eight sessions has not provided a favourable enough backdrop to launch a transaction, especially as shares in DRes’s nearest peers, Cairn Homes and Glenveagh Properties, are currently languishing between 24 per cent and 27 per cent below where they started 2018 on the Dublin market.

DRes is the latest of a string of Irish IPO hopefuls to have put plans on ice recently. The Irish Times reported last month that US private equity group Oaktree and Dublin-based Sigma Retail Partners has delayed until next year a decision on whether to proceed with Ireland’s first retail real-estate investment IPO.

Press-Up, the pub, restaurant and hotel group led by Paddy McKillen junior, decided last month to mothball plans for a stock market flotation, while the Sunday Times reported over the weekend that property investment and hospitality group Tetrarch has shelved plans for a 2018 flotation due to market volatility.

DRes, which has been working with US investment bank JP Morgan and Davy in Dublin on a transaction, is understood to control a landbank capable of delivering over 6,400 houses and apartments.

This would give it a more advanced asset base than either Cairn or Glenveagh when they floated in the past three years. About two-thirds of DRes’s plots are in Adamstown, near Lucan in Co Dublin.

The company recently commenced construction of 150 units at another key site in Portmarnock in north Co Dublin, which has capacity for 1,000 units.