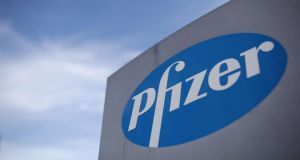 Pfizer said the cost of funding non-contributory defined-benefit pension schemes in Ireland had risen by more than 1,000 per cent since 2009. Photograph: Dan Kitwood/PA Wire

Workers at two of Pfizer’s Irish plants have voted for industrial action over changes to the company’s pension arrangements.

Siptu has yet to inform the pharmaceutical giant of the form any industrial action will take following the ballot of 900 workers involved at its sites in Ringaskiddy and Little Island, both in Cork.

The company said on Wednesday it was disappointed at the outcome of the ballot and urged the union to return to the negotiating table.

Pfizer is seeking to close one of the few remaining non-contributory defined-benefit (DB) pension schemes in the private sector in Ireland.

Defined-benefit schemes – where the employer promises to pay a set pension in retirement based on years of service and final salary – have almost disappeared. Schemes, such as the one Pfizer is trying to close, which require no financial contribution by employees towards their pension are now a historical anomaly.

Even in the public sector, where pensions are more generous, staff contribute to the cost and, more recently, the pension is based on an average salary over a working lifetime rather than a higher final salary figure.

Pfizer employs 3,300 people in Ireland across seven different sites. Aside from the two Cork plants, some 100 commercial and financial services staff in Dublin are affected by the closure of the DB fund to future accrual. All other Pfizer staff in Ireland are already on the newer defined-contribution arrangement – where the final pension is determined by the investment performance of contributions made by an employee and/or their employer.

Pfizer said that it had been looking to restructure pensions arrangements in Ireland since 2014.

Under its proposals, the staff at the Little Island and Ringaskiddy plants – together with the Dublin office staff – would retain the rights to a guaranteed pension already built up, or accrued. However, pension benefits for any future service would be paid into the new defined contribution arrangement.

The Siptu ballot was held on a particular element of the broader dispute – the treatment of new recruits to the company. The union wants them to be made members of the existing scheme, while the company has committed to granting them membership of whatever scheme is in place at the conclusion of negotiations.

In a statement on Wednesday evening, the company said: “This change is part of a global initiative as the environment for DB plans has become very challenging due to the increasing and unsustainable cost and volatility associated with these types of pension plans.

“In Ireland, the cost to the company of funding these non-contributory DB plans has increased over 1,000 per cent since 2009 and the necessity for change has become even more urgent and cannot be ignored.”

It was reported last year that the defined-benefit schemes had cost Pfizer €10 million over the previous five years.

The company said on Wednesday that the continuing rising cost of the schemes “further negatively impacts the competitiveness of Pfizer Ireland”.

The closure of the Little Island plant was announced in 2013 but that decision was overturned in March 2015, saving 160 jobs, as demand for atorvastatin outpaced expectations despite the loss of patent protection. Little Island is a manufacturer of bulk drug ingredient, focused on atorvastatin.

Under patent, the drug known as Lipitor had been Pfizer’s biggest-selling blockbuster drug.

Pfizer said last night that its proposals would have no impact on people who had already retired and deferred members – those who have left Pfizer but have not yet retired.

1 The wealth of the Irish – how do your assets match up?
2 Irish company to test vaccines on volunteers deliberately infected with Covid-19
3 Dunnes Stores set to enter grocery delivery market
4 KBC Ireland fined €18.3m for ‘unconscionable’ tracker scandal role
5 How to upgrade your home entertainment system for less
6 Will Facebook walk away from European market after data protection 'hissy fit'?
7 Dublin and Cork airports look at setting up pre-flight Covid testing centres
8 Irish Fairy Door Company moves to licensing model
9 Air travel never going ‘back to way it was’
10 Eir takes on extra staff as ComReg chases it on complaints
Real news has value SUBSCRIBE