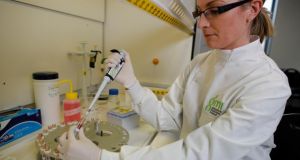 Genomics Medicine Ireland will work with Abbvie to examine potential genetic triggers for a series of major chronic diseases in the areas of cancer, neurosciences and immunology. Photograph: Conor McCabe/GMI

Multinational pharma group Abbvie is joining with an Irish start-up to map the genomes of 45,000 Irish people in an effort to develop drugs for the future.

The 15-year deal will see Genomics Medicine Ireland work with the US group to examine potential genetic triggers for a series of major chronic diseases in the areas of cancer, neurosciences and immunology.

Genomics Medicine Ireland (GMI), which was founded in 2015 and raised $40 million (€37.9 million) in funding last year, uses population-based genomic analysis to help target drug development. The approach is built on work done in Iceland by another company, DeCode.

“In the first place, we have a founder population, that is a population that is highly representative of other populations, which means our results should be highly applicable elsewhere,” he said.

The initiative, announced on Monday at the JP Morgan Healthcare Conference in San Francisco, will also involve DeCode spin-off WuXi NextCODE, which specialises in algorithms that allow analysis and sequencing of whole genomes on a scale that would not have been possible until recently.

GMI has already started recruiting volunteers to provide genetic data for the project, but said it would be scaling up its efforts considerably over the next 18 to 24 months.

The data is “depersonalised” so that no information identifying donors of particular genetic data is retained by the companies.

Ultimately, Abbvie, which already employs more than 600 people in Ireland, will use the research database developed by GMI to identify new approaches for drug development and discovery.

Mr Crowley said Abbvie was a “fantastic fit” for GMI “both for the disease areas that are most compelling and that can deliver results in a realistic timeframe, and also for their vision, which very much aligns with our own. They understand the power of genomics.”

Paul Saunders, head of innovation with the Ireland Strategic Investment Fund, which is an investor in GMI, said the collaboration demonstrated the potential of GMI to drive world-class innovation in healthcare.

“And it provides the opportunity for Irish clinicians and researchers to advance genetic discovery and for patients to benefit from the prospective development of new therapeutics,” he said.