Trump accuses Big Pharma of ‘getting away with murder’ 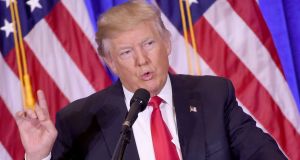 US president-elect Donald Trump has sent a warning shot across the bows of Big Pharma at his first press conference since winning the election in November.

He said the next focus would be on bringing home jobs in the pharma sector.

“We have to get our drug industry coming back,” Mr Trump said. “Our drug industry has been disastrous. They’re leaving left and right. They supply our drugs, but they don’t make them here. To a large extent.

“And the other thing we have to do is create a new bidding procedures for the drug industry because they’re getting away with murder.”

“And there’s very little bidding on drugs,” he said. “We’re the largest buyer of drugs in the world, and yet we don’t bid properly. And were going to start bidding and were going to save billions of dollars over a period of time.”

“Between linking hacking to China, saying pharma companies are getting away with murder and that the last administration created Isis, it is an intriguing press conference,” said David Holohan, chief investment officer at Merrion Capital. “Investors should be more worried of his presidency than they appear to be. He is a total loose cannon.”

The pharma and medtech sectors are critically important to Ireland, employing almost 50,000 people between them, according to IDA Ireland figures.

Nine of the world’s top 10 players have operations here and there are 33 pharma and biopharma plants in Ireland approved by the FDA.

Pharma-chemical products make up half the total goods exported from Ireland, according to CSO data.

Ireland has featured more heavily than any other country in corporate inversions even though the Government here says it is not encouraging the process, which brings little or no financial benefit to the exchequer and runs the risk of reputational damage.

An attempt by Pfizer, the world’s largest drug company to relocate to Ireland by purchasing Allergan – itself the product of a previous corporate inversion – saw the Obama administration introduce strong new rules to deter the process.

However, Medtronic, one of the largest medical device businesses in the world, did successfully relocate its headquarter operations to Ireland with a corporate inversion of rival Covidien. Like many companies in this position, most operational control of the business remains in the United States.

Concern over rise in Covid-19 cases in Louth, Donegal and Waterford