Irish people to play their part in genomics revolution 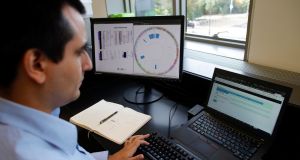 Research being carried out at Genomics Medicine Ireland

Ireland has not traditionally been a market for pharma companies conducting clinical trials. Despite most of the major player in the drug sector having a significant presence here, the population was deemed too small to serve such a purpose.

That may be so, but the announcement yesterday that 45,000 Irish people may help deliver some of the drugs that will tackle some of today’s most dreaded disease – cancer, Alzheimer’s and multiple sclerosis, as well as other autoimmune and neurological conditions – puts this country tight to the forefront of some of the most exciting research going on today.

Its deal with Abbvie – announced at the JP Morgan Healthcare Conference – will see 45,000 Irish volunteers provide genetic data to try to chart the triggers of certain diseases.

The scale of the study is enormous and it would not have been possible at all even a year or two ago. This is because these complex diseases, which Genomics Medicine Ireland and its partner Abbvie want to decipher, are the result of the interaction of hundreds, or possibly even thousands, of genes.

Abbvie, which has had a strong operation in Ireland for many years – albeit under different names, including Abbott Labs – brings the financial muscle necessary to deliver such an ambitious project within its 15-year timeline.

The precise terms of that deal have not been disclosed but Abbvie clearly hopes the study will deliver information that will allow it to better develop drugs to tackle conditions that still afflict millions around the world.

Genomics combines sciences and big data and is one of the fastest growing areas of pharmaceutical research. The outcomes, as always at this early stage, are unclear, but Ireland Inc can only benefit if it is seen as a strong potential player.