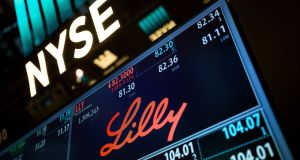 Eli Lilly: has suffered some recent setbacks with the US Food and Drug Administration. Photograph: Michael Nagle/Bloomberg

Eli Lilly and Co reported a bigger-than-expected quarterly adjusted profit as the drugmaker benefited from higher demand for its newer products including diabetes treatment Trulicity and psoriasis drug Taltz.

“Lilly’s new product launches, including Trulicity and Taltz, led the company to a strong quarter of volume-driven revenue growth,” said David Ricks, who took over as chief executive on January 1st.

However, the drugmaker has suffered setbacks recently, with the US Food and Drug Administration earlier this month declining to approve a new drug for rheumatoid arthritis made by Lilly and partner Incyte.

Lilly in November took a $150 million (€138 million) charge associated with the failed trial of its high-profile Alzheimer’s drug, solanezumab.

Lilly recognised a charge of $857.6 million in the latest quarter related to the acquisition of CoLucid Pharmaceuticals, which the drugmaker bought in January for about $960 million.

Excluding items, the company earned 98 cents per share, above analysts’ average estimate of 96 cents, according to Thomson Reuters I/B/E/S.