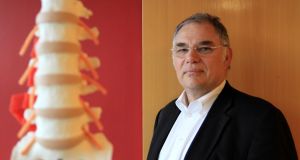 Mainstay Medical chief executive Peter Crosby; he will stand down in October of this year. Photograph: Nick Bradshaw

Losses at Dublin-based Mainstay Medical have continued to mount for the first half of 2017.

Meanwhile, the group’s cash pile has reduced in the past six months by 33 per cent to $24.5 million.

Mainstay indicated that one of the principal risks for the company includes the difficulty to achieve profitability. “We expect to require additional funds in the future in order to meet our capital and expenditure needs.”

It also noted its reliance on the commercial success of ReActiv8, the company’s only product that has been launched commercially.

The company is, however, positive about a clinical trial stemming from its ReActiv8-B product – a device for people with disabling chronic low back pain.

The ReActiv8-B clinical trial has been advanced throughout this year and “over half the required number of implants have now been performed”, the company said.

Peter Crosby, the group’s chief executive, said: “The ReActiv8-B clinical trial is a key step towards commercialisation in the US, our most significant target market. The trial is advancing well, and the enrolment rate has been accelerating as the number of active sites increased during 2017, and based on our experience to date we anticipate enrolment will complete around the end of 2017, with results available in 2018.”

The company also announced on Tuesday that Jason Hannon would succeed Mr Crosby as chief executive as of October 9th.

“Mr Hannon’s appointment results from the company’s succession planning associated with the retirement of Mr Crosby at the end of October,” Mainstay said in a statement. “We are delighted that Jason is joining as our new CEO. Jason’s broad medical device experience has spanned areas critical to the future success of Mainstay,” said Dr Oern Stuge, the company’s chairman.

1 Johnny Ronan loses out on €315m Dublin docklands deal
2 Pre-flight Covid tests possible ‘within days’ if given go-ahead – airports
3 Ryanair and Aer Lingus to cut further flights from regional airports
4 Meath site primed for delivery of enterprise and employment
5 Bank of Ireland takes €169m charge for 1,700 job cuts
6 How long can Government afford to keep State pension age at 66?
7 City businesses can’t afford to wait for a Covid-19 vaccine
8 How much state pension will I get next year?
9 Budget 2021: fuel prices rise and high-emission cars hit
10 PTSB plays down Ulster Bank talk as it sells €1.4bn of loans
Real news has value SUBSCRIBE