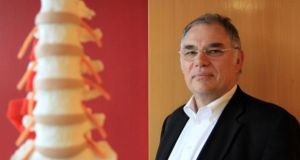 Dublin-listed Mainstay Medical, a company that is targeting chronic back pain with an implantable device, is expecting to seek further funding in the near future as it ramps up its commercialisation plans.

The medical devices firm, which recently announced it had passed the mid-point in clinical trials in the US, made its first commercial sale earlier this year in Germany.

Mainstay’s ReActiv8 product is implanted in a surgical procedure and works by using electrical stimulus of nerves in muscles supporting the lower spine. The product won European approval last year after which it raised €30 million in funding to commercialise ReActiv8.

Speaking to The Irish Times, chief executive Peter Crosby said it was looking at various options in terms of additional fundraising.

“We know we will need more capital to complete the US trial and to get pre-market approval. We’ll also need more to drive commercialisation, but we haven’t given any indication yet on how much we’ll be looking for or when,” said Mr Crosby.

“Our existing investor group is very supportive of Mainstay though, and so when we do go out to raise additional capital I’m confident that they will be contributing again.”

In a note included with the accounts, company directors said Mainstay expected to continue to incur losses in the medium term.

Operating expenses for the medical devices firm rose $3.9 million last year to $16.8 million as it kicked off its clinical trial in the US and began commercialising the product in Europe.

Earlier this year Mainstay announced a major milestone when it reported it had made its first commercial sale with the first implant being performed in Koblenz, Germany. This comes after the first trial patient in the US had the neurostimulator implanted late last year.

Mainstay expects to complete the US trial by the end of 2017, with results due next year. The trial has been designed so the company can take an “interim look” to establish how successful it will likely be ahead of time.

Mainstay estimates the market for disabling chronic lower back pain in patients not suitable for surgery is worth up to $30 billion, and, as of now, the company says there are no competing devices.

Research and development costs for the company totalled $3.6 million in 2016 as against $2.7 million for the proceeding year, while clinical and regulatory expenses rose to $5.6 million from $4.4 million.

Mainstay, which floated in Paris and Dublin in April 2014 in an IPO that valued it at €90 million, is headquartered locally with subsidiaries operating in Ireland, the US and Australia. The group moved to Dublin in 2012 from the US following a $20 million funding round that was led by Fountain Healthcare Partners.

1 Bank leaked my loan request to family who tried to rip me off
2 Eason acquires rival Dubray Books for undisclosed sum
3 Solar panels: Are they worth the investment?
4 Can I see my father’s previous wills?
5 Accumulated profits at David McWilliams’ media company hits €675,000
6 Average weekly wage rose to €783 in final quarter of 2019
7 Siblings who became ill next to wind farm settle case
8 Ryanair and Aer Lingus monitor impact of coronavirus on travel to Italy
9 How can I view my dead brother’s will if I’m not the executor?
10 When the Chemistry no longer works – the closing of a leading Irish ad agency
Real news has value SUBSCRIBE