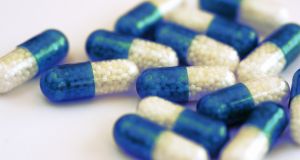 Amryt Pharma has reported a sharp rise in sales for the six months to the end of June as the company became a commercial pharmaceutical business. Photograph: Getty

Amryt Pharma has reported a sharp rise in sales for the six months to the end of June, as the company became a commercial pharmaceutical group.

Sales of €6.18 million were up dramatically on the €161,000 recording this time last year and ahead of management expectations.

The increase was driven by Lojuxta, a drug for a rare condition that can lead to early onset blocking of arteries and to heart attacks, for which Amryt secured a licence at the end of last year.

The company reported an operating loss of €5.79 million for the period. Pretax losses, which were impacted by exceptional charges related to the reverse takeover last year that created the business in its current form, were €13.8 million.

Sales of Lojuxta accounted for €5.75 million of turnover, with the company’s derma-cosmetics range Imlan adding €429,000.

The company has also reported “good progress” in developing its lead in-house product – AP101 – which is a potential therapy for a hereditary condition, “butterfly skin”, or epidermolysis bullosa, which leads to the blistering of the skin in patients at the slightest touch.

The company started enrolling patients in a phase III clinical trial in April, and expects an interim analysis of progress in the first half of 2018.

Chief executive Joe Wiley said the licensing of Lojuxta at the end of last year was a major step in the company’s development.

The company said it had drawn down the first half of a €20 million five-year debt facility from the European Investment Bank in April.

Shares in Amryt rose 18.5 per cent in early trading in Dublin at 27 cent following publication of the figures.