Novartis to charge $475,000 a patient for breakthrough cancer drug 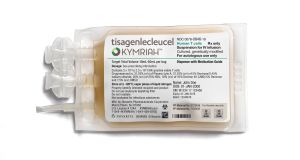 Swiss pharmaceuticals group Novartis has said it will charge $475,000 (€400,000) a patient for its new cancer therapy, putting it among the most expensive drugs of all time.

Bruno Strigini, chief executive of oncology at Novartis, said: “We carefully considered the appropriate price and looked at many factors, including the medical and clinical value.”

He was speaking on Wednesday shortly after the treatment was approved by the US Food and Drug Administration, which gave Novartis a green light to use the medicine in children and young adults with a type of leukaemia.

The treatment, known as chimeric antigen receptor therapy or Car-T, has shown great promise in clinical trials, with the ability to send tumours into remission in blood cancer patients with just weeks to live.

But the therapy is complex and expensive, with a process that involves extracting a patient’s blood cells in hospital, transporting the plasma – normally by air – to a laboratory, and re-engineering them before they are returned.

Analyst estimates put the cost of goods at roughly $200,000 a patient.

The price per person is likely to be much higher when accounting for additional costs, such as drugs to prepare the patient for the treatment and medicines to control potential side effects.

With the exception of a handful of treatments for ultra-rare diseases, the drug, known as Kymriah, is the most expensive to go on sale.

Dr Strigini pointed out the price tag was below the amount that some independent bodies had said the drug was worth.

Britain’s National Institute for Health and Care Excellence recently said Car-T could be worth up to $649,000 if given to children because of the huge number of “life years” that could be saved.

Novartis also said it had started working on an “innovative approach” to pricing the drug with the US Centers for Medicare and Medicaid Services, the federal agency that administers state-funded healthcare for people on low incomes.

The arrangement would see Novartis provide the drug free of charge if patients did not respond to treatment within a month.

David Mitchell, president of Patients For Affordable Drugs, said: “While Novartis’s decision to set a price at $475,000 per treatment may be seen by some as restraint, we believe it is excessive.

“Novartis should not get credit for bringing a $475,000 drug to market and claiming they could have charged people a lot more.”

Mr Mitchell said the campaign group thought a price below $300,000 was more appropriate, but said the estimate came with a “huge disclaimer” because Novartis has not shared information about its costs.

Scott Gottlieb, the FDA commissioner, said of the treatment: “We’re entering a new frontier in medical innovation with the ability to reprogramme a patient’s own cells to attack a deadly cancer.

“New technologies such as gene and cell therapies hold out the potential to transform medicine and create an inflection point in our ability to treat and even cure many intractable illnesses.”

Other drugmakers have been developing Car-T products, including Kite Pharma, which was snapped up for $11.9 billion by Gilead Sciences earlier this week.

Kite has submitted its Car-T product, AxiCel, for FDA approval, and a decision is expected in November. – Copyright The Financial Times Limited 2017