Irish firm hopes to catch the eyes of beauty giants 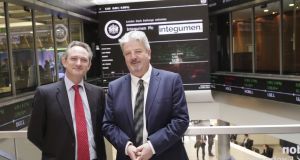 The chief executive of Ireland’s youngest publicly-quoted company, Integumen, has said he remains “very excited” about the firm’s prospects even though he is disappointed by a drop in the stock in less than two weeks on the market. The company offers a range of products in the skin science, oral health and woundcare sector.

Dalkey-based Integumen raised £2.25 million (€2.65 million) in an initial public offering and listing on the London Stock Exchange’s junior market on April 5th, giving it an initial market capitalisation of £8.25 million. The stock has fallen by 22.5 per cent since flotation to 3.875p.

“I wouldn’t be human if I wasn’t disappointed [by the initial stock performance],” said Declan Service (56), Integumen’s chief executive. “But we’ve got a firm pipeline, and my job is to drive the business forward.”

Integumen was set up last year and bought out a healthcare products business in October from Dublin- and London-listed Venn Life Sciences. Venn, which provides clinical trials services to pharmaceutical and biotech companies, retained a 25.6 per cent stake in Integumen after its flotation.

Mr Service said the group, which reported sales of £152,558 for the first half of last year, expects to see “strong revenue growth in the next 12 months,” driven initially by its oral hygiene products, including a disposable tongue vacuum cleaner for use in dental surgeries and a tongue gel for home use. It recently signed a deal to supply the oral products beyond its current market in Europe, into South Korea.

The company is also working on skincare products, including a face serum and night cream, under a brand called Visible Youth as well as a high-end, non-medical treatment for acne and blemishes, called Clarogel. About £15 million has been invested to date on the group’s products and technologies, according to documents prepared for the flotation.

“The heavy lifting on all of our pipeline has already been done,” Mr Service said, adding that the company is focused only on treatments that do not need to go through expensive clinical trials. “What we’re selling to investors is that we’re not a high-risk pharma play. If one product doesn’t perform as we’d hoped, there are six other all ready.”

The strategy is largely to license its products to personal healthcare and beauty products companies. “We’re not going to compete with L’Oréal,” said Mr Service. “We’re going to be noticed by the likes of them and Estée Lauder.”