Abbott sales and profit propped up by St Jude acquisition 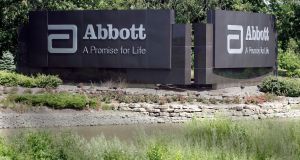 Net sales at the company, which completed the St Jude acquisition in January, rose 3.2 per cent on an operational basis to $6.34 billion, ahead of the average analyst estimate of $6.15 billion. But, while sales in its diagnostics, medical devices and branded generic pharmaceuticals divisions grew in the three months to end-March 31st, Abbott’s nutrition business continued to suffer.

Abbott last week agreed to buy troubled diagnostics company Alere at a lower price of around $5.3 billion, below the $5.8 billion previously announced, ending a prolonged legal battle. The deal ran into trouble shortly after being announced in February, after issues related to Alere’s accounting and sales practices came to light. Both companies ended up suing each other last year, with Alere forcing Abbott to move ahead with the deal, and Abbott wanting to pull out.

The revised deal is expected to close in the third quarter, and will help Abbott expand in point-of-care diagnostic testing, a market that is growing as doctors increasingly adopt rapid tests that speed up treatment. – Reuters

1 Belgium helps Ireland to a Brexit boon
2 ‘My rent here is so low it’s a joke’
3 Can Grafton Street stop the flood of closures?
4 New Powerscourt Springs hotel to open in defiance of virus gloom
5 This charming man: how Paschal Donohoe won the Eurogroup presidency
6 ‘Sad day’ for House of Ireland as tourism retailer goes out of business
7 Goodbody loses a second suitor as Bank of China deal falls through
8 Bank of Ireland launches €200,000 prize fund
9 FC Barcelona to pursue Nike for compensation over defective shirts
10 Enterprise Ireland opens two new €1m funds for entrepreneurs
Real news has value SUBSCRIBE