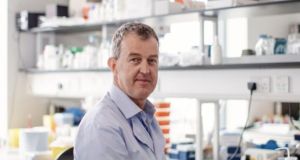 Matt Cooper, co-founder and chief executive of Irish biotech company Inflazome, has won top prize in the emerging category at the EY Entrepreneur of the Year Awards.

Swiss drug giant Roche paid €380 million for the company in September in a deal that could yet be worth close to €2 billion if certain milestones are met.

Prof Cooper said he was delighted to accept the award on behalf of Inflazome, which he described as a “great Irish success story”.

Speaking via Zoom at 4.30am in Queensland, Prof Cooper said the award was great as a signifier to young people that working in science was a good career.

“What matters most in all of this is the patients who desperately need medicines for Parkinson’s, Alzheimer’s and depression,” he said.

Inflazome has two drugs in clinical trials: Inzomelid, for neurodegenerative diseases in the brain; and Somalix, for inflammatory diseases in the rest of the body. It is focused on blocking a key danger sensor, NLRP3, in immune cells, called inflammasomes, which, if overactive, is implicated in a wide range of chronic inflammatory conditions. The company’s drugs are designed to inhibit the function of this NLRP3.

“Developing two drugs in four years with a group of just 13 people is a fantastic achievement, and I’m so proud of the team,” Prof Cooper added.

The other finalists in the emerging category this year were Devan Hughes of Buymie; Ríona Ní Ghriallais and Conor Harkin of ProVerum; Brendan McDowell of BPerfect Cosmetics; Dr Sinéad B Bleiel of AnaBio Technologies; Gary Wickham of MagGrow; John Goulding and Joe Lennon of Workvivo; and Leonora O’Brien of Pharmapod.