Cork based company recorded losses as revenues dipped by 4% to €1.29bn 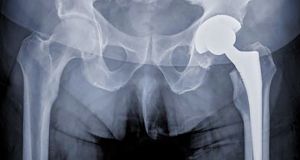 In Ireland, about 3,300 patients received these implants, across 16 public and 14 private hospital sites nationwide.

New accounts for DePuy Ireland Unlimited show that a €1 billion provision for a hip replacement product recall and associated costs contributed to the substantial losses. It followed a pre-tax profit of €107 million in 2017.

In Ireland, about 3,300 patients received these implants, across 16 public and 14 private hospital sites nationwide.

Along with the €1 billion product recall provision, a €2.66 billion impairment by DePuy Ireland Unlimited in subsidiaries resulted in the pre-tax loss in 2018.

A note attached to the accounts state that the impairment occurred “due to an impairment indicator noted due to the commissioning of an independent valuation report on underlying financial assets”.

Staff costs at the DePuy Cork company declined by 3.6 per cent to €75.3 million.