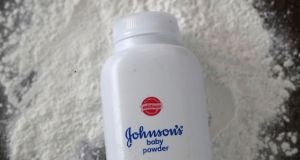 Johnson and Johnson agreed in the middle of a trial to pay more than $2 million (€1.8 million) to resolve an Irishwoman’s claims that asbestos-laced baby powder caused her cancer, according to sources.

The settlement marks a rare decision by the drugmaker to cut a deal while fighting thousands of similar claims.

Jurors in state court in Oakland, California, heard more than two weeks of testimony before the judge told them on Monday that the case had settled.

While the terms weren’t made public, sources said plaintiff Linda O’Hagan and her family agreed to Johnson and Johnson’s offer.

Johnson and Johnson scored a big win last month in a talc case in St Louis, where it had been hit with a $4.7 billion verdict in 2018 on behalf of more than 20 women blaming their cancers on its baby powder.

In the December trial, jurors rejected a woman’s claim her ovarian cancer was tied to use of Johnson and Johson’s talc-based powder.

“In litigation of every nature there are one-off situations where settlement is a reasonable alternative,” Kim Montagnino, a spokeswoman for the company, said in a statement. “The decision to resolve any particular case in no way changes our overall position that our talc is safe, is asbestos free and does not cause cancer.”

The company, which faces almost 17,000 suits accusing it of hiding that its baby powder was contaminated with asbestos, has been on a roll at trial, racking up eight defence verdicts last year while losing five.

While its unusual for Johnson and Johnson to settle a case mid-trial, it has resolved some talc cases just before a trial started or while proceedings were in progress. The company hasn’t set up any organised settlement programme, opting instead to contest claims at trial.

Ms O’Hagan was diagnosed with mesothelioma – a cancer specifically linked to asbestos exposure – in August 2018 and underwent treatment for the disease, but probably had less than two years to live, her lawyers told jurors in opening arguments.

The 61-year-old moved Ireland to the US in 1991. Evidence in the case indicated she’d used baby powder for decades.

Another defendant in the case, a unit of London-based Rio Tinto Minerals, also settled during the trial for an undisclosed sum. Ms O’Hagan alleged the company mined the talc that was used in Johnson andJohnson’s baby powder and knew it was tainted with asbestos.

Also on Monday, a state judge in California’s Solano County threw out a woman’s claims that contaminated baby powder caused her cancer after finding she didn’t have evidence showing the talc she used was specifically laced with asbestos. “The mere inference that a talc product might contain asbestos does not create a triable issue,” Judge Wendy Getty concluded. – Bloomberg