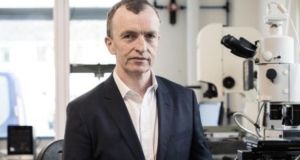 Galway-headquartered medtech and drug delivery company Aerogen is to create at least 80 new jobs next year.

The news was announced at the official opening of its new 27,000 sq ft engineering labs at Galway Business Park in Dangan.

Aerogen, earlier this year announced 50 new jobs after it secured a €30 million loan from the European Investment Bank to expand its manufacturing facilities and increase research and development activities.

Founded by John Power as Cerus Medical in 1997, Aerogen’s acute care aerosol drug delivery devices are used in 75 countries, with its customers including 80 per cent of hospitals in Ireland and 60 per cent of the top 100 hospitals in the United States.

“Aerogen’s business continues to grow rapidly as we develop our newer international market in the Middle East and south east Asia whilst generating increased demand in our primary markets of USA and Europe. Servicing this growth has required significant increases in capacity and the ongoing hiring of talented professionals both at home and overseas,” said Mr Power.

He said production output at Aerogen has more than doubled in the past four years while the number of employees has increased by 24 per cent this year to 263. Their products have been used to treat close to nine million patients across 75 countries worldwide.

Aerogen reported revenues of €58.4 million last year, up from €54.8 million in 2017. Pretax profits fell however to €7.35 million from €12 million over the same period on the back of continued investments in the business.

1 Aldi to impose limits as Christmas toys go on sale
2 Fair deal? Family at odds with hospital and each other not so sure
3 What to consider if older person or loved one needs care at home
4 Monsoon landlords win challenge over creditors arrangement that cut rents
5 Irish house prices could buck European trend and fall this year, says S&P
6 Irish elearning company LearnUpon closes €47.4 million investment
7 First look: Is the iPhone 12 Pro the best smartphone out there?
8 ‘I hate haggling because I hate when people do it to me’
9 Ireland ‘needlessly importing timber’, as industry blames Government
10 ‘Essential’ retailers risk a firestorm if they exploit the closure of the ‘non-essential’
Real news has value SUBSCRIBE